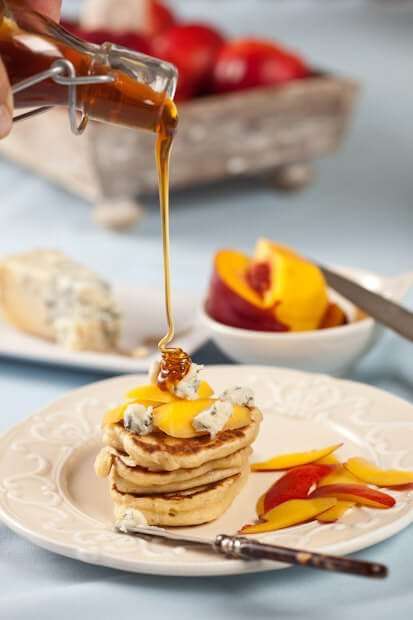 Why is a blini different then a regular pancake? Apart from the different method of baking them and the fact that you need to incorporate yeast in the mix etc. I really didn’t taste that big of a difference with the pancakes we would normally make here. I had read about blini’s in the decembernumber of Donna Hay Magazine and figured I wanted to give them a try. I had this idea to top the blini’s with a good blue cheese and some nectarines or other sweet fruit, so I faithfully followed the instructions to make these little buggers… 🙂 O and yes, the biggest difference is the fact that they rise while baking, so they become higher then a regular flat pancake! I haven’t quite figured out if there really is a taste difference. Will need to eat more of them first! 🙂 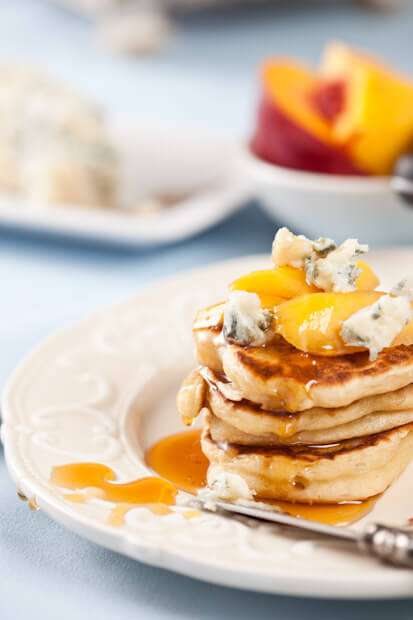 I added flour, buckwheatflour, salt and (dry) yeast together. Put some milk together with sour cream on the stove to make it lukewarm. Add an eggyolk to it and slowly add the milkmixture to the flour. Let it stand for about half an hour, covered with a damp cloth and you’re good to go.

My idea was to make lovely round blini’s, which – as you can see – did not work all that well. And the ones in the photos where the best shape! Imagine what the rest looked like! Haha… I then had this visual in my head of making the blini’s look really nice with juicy nectarines and crumble some blue cheese on top. Well, that is where it did not go exactly as planned. The cheese was absolutely gorgeous but did not crumble at all. It was Blue de Basque (gorgeous and delicious!) and it had been sitting outside of the fridge for the good part of an hour, so was quite soft and didn’t get me the result I waned. Then it turned out that the nectarines I bought weren’t really ripe yet, so that was the end of the plan.

The honey made up a bit for the missing sweetness of the nectarines, but I can see how this would work really well with all sorts of fruit. Blini’s are quite versatile and you can have them with lots of different toppings. Either savoury or sweet. Despite the unripe nectarines this was already delicious, but will be so much better once the nectarines have ripened. I have some leftover which I am sure will be consumed later today by Tom, but I want to try this again and see if I can make it look and taste a little better then it did today.

Still for the experiment; quite successful. I will make these next time with regular pancake batter and see what happens if I bake them in a ring to achieve the same height.

Instead of the sourcream you can incorporate ricotta into the batter or add herbs or other flavours to make it either sweeter or more savoury. I started with the base recipe which is as follows: