Walking through the supermarket – as recently converted Brussels Sprouts lover – my eye is suddenly falling on purple Brussels sprouts… And yes, of course I could not leave them in the store but I had to bring them home. Let’s face it; how often have you seen them purple? I had never seen them before and they are really pretty and photogenic. Not that you would be able to tell from looking at the pictures of this salad. We had planned on shooting them also raw before cutting and everything but as it goes, we totally forgot about that. We ate it all… That’s how it goes in this household. The idea for this recipes came from the Jamie Magazine in which I spotted a salad with shaved Brussels sprouts and I was intrigued. It sounded like fun but I didn’t really like the taste of the veggies raw. It just was a bit too crunchy for my taste. So I opted for roasting them in the oven with a bit of oil and pepper and salt. That makes them really delicious, so I highly recommend you do that. I’ve also tried blanching but I prefer them roasted. It would work either way though.

They do say in the original recipe to shave the Brussels Sprouts (what is that in short anyway? BS? That kind of gives me a whole different idea!) with a mandoline and I am sure that would be way easier but I can’t really think of a way to slice them on a mandoline and slice your fingers along with it. They’re just too small! It works fine in a food processor with an attachment or you can cut them by hand. It just takes a little longer but works as well. I made this salad with farro. I love the taste, nutty and delicious. If you can’t find it you can substitute with spelt, barley, rice or couscous or whatever else takes your fancy. 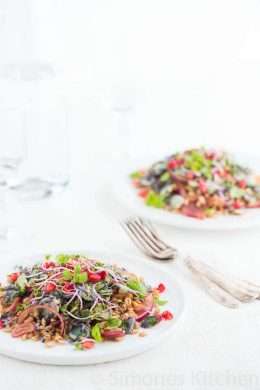 6 comments on “Salad of farro, pomegranate and brussels sprouts”