Seriously… I would have never guessed I would say that at some point in time. If you’ve been following me for a while you might have seen the story of my hate for Brussels Sprouts pass by on occassion. So that I am now seriously converted into a lover of those little green cabbages is nothing short of a miracle. For me the key part is to not cook them. I still don’t like them cooked. Or well not as much as I like them roasted or stirfried.

Last Sunday Tom and I had a free day together for the first time in about a year or so. Which was totally lovely. So we started with a long and extensive breakfast in bed and after that we had planned to cook together. Maybe it is a bit weird that I still choose to go cooking on my day off, considering I do that a lot for work related stuff as well but it is so different to cook for your own pleasure! So we were having fun in the kitchen!

I still had a bag of sprouts leftover from something the week before. And going through the good food magazine I saw a recipe for Brussels Sprouts. It was a salad, but I have attempted to make a salad of Brussels Sprouts before and I just don’t like them raw. But it did bring me to this particular recipe and with the help of the vegetable bible I looked up some flavor combinations and voila. It was delicious!

I also had a tin of chestnutpuree leftover (the unsweetened kind) from the day before and sprouts and chestnuts are a natural and classic combination so I made it into a chestnut dressing. The sprouts I shaved very thinly using the foodprocessor and I stirfried them together with garlic and onions and the result is a delicious warm salad. With grains (I used farro) it is a complete meal, but without it would be a really good sidedish for christmas. Something else from the standard too. 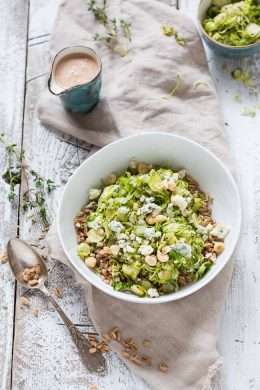 For the chestnut dressing