And than suddenly it hits… those cravings. Cravings to eat whatever I want, whenever I want. Drink a glass of wine with friends… those kind of cravings. I’m on day 18 of my whole30 and to be honest, it was going so smoothly that I think I let my guard down a bit. I became too comfortable for my own good. And as it turns out, things can go wrong in a flash.

Well they haven’t gone wrong. Not really. One of the tricky things for me when doing a whole30 is that I still need to create recipes and still need to make them and ideally taste test them as well. For me that meant making whole30 compliant meals and dishes and just tasting a little bit. Sometimes that also meant tasting things that had whole30 compliant ingredients but wouldn’t fall under the whole30 necessarily. Like the chocolate pudding I posted the other day.

Today I had a shoot in my studio and for some reason it started going wrong from the very first moment. Probably because I made the mistake of not eating breakfast. Wrong!!! (*bangs head against the door*) I made quite a few things that were all ok in itself such as a homemade fruit & nut bar, egg muffins for bringing along on the road, salad wraps with guacamole, mackerel and spinach and spiced cashew nuts.

What did me in? I think it was the fruits & nuts bar. 50% dates and 50% cashew. Probably ok as an emergency food, but definitely not ok to munch on during the shoot. As I did. The result? A massive sugar crash afterwards. I could have lied down and slept on the spot. And I haven’t had that since I started the whole30, so I feel double stupid for eating too much of it. And not much else in terms of a proper meal. It was all “nibble on this and nibble on that” during the day. Even though it was salad wraps, cashew nuts and muffins. It was still not good.

On top of that we are going out with friends for dinner tonight. In a place that has compliant things (I checked before hand) but I feel myself slipping out of control. Just because of today! How stupid of me, while things were going so well!! Really mad at myself now. I’ll give an update on how dinner went before I’ll post this tomorrow. I will NOT continue on this path!

What I should have done this morning was eat a breakfast such as this delicious raspberry chia pudding which is fabulous with caramelized bananas. It needs the bananas too, so make sure you add the banana on top for this one. Again, this is nice as a change during your whole30 but I wouldn’t necessarily eat this for breakfast every day. Too much sweet tastes and that is my weak spot. As I have proven again today. More to follow on that!

And I managed to stay on course during dinner. It was hard as they had this delicious trifle dessert but I resisted. I had a smoked eel and salmon for starter and a freshly grilled sole for the main. Drank water during it all and felt proud of myself after… Back on track I hope! 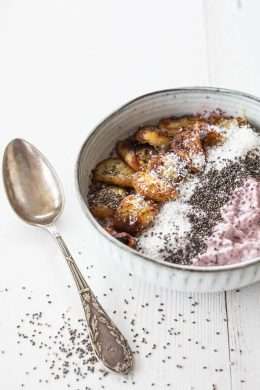