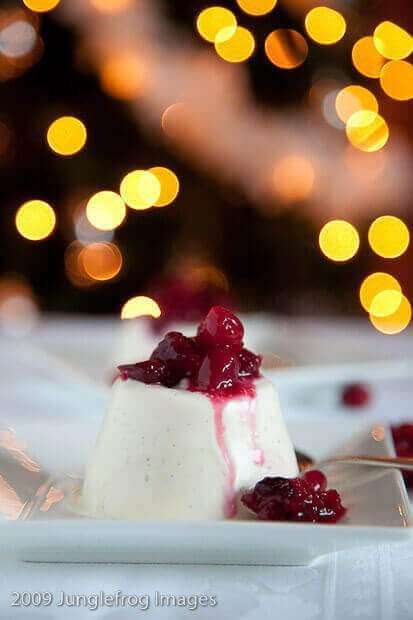 I have a thing for pannacotta…. ever since I tasted the first (the first homemade version that is) pannacotta I am sort of addicted. It’s not that I make this dessert every week or even every month for that matter, but no matter what flavor I make; I love it every single time… From the lemon buttermilk pannacotta, to the cinnamon apple pannacotta, to this seasonal variety. They’re all good… Not so good for the waistline though; lots of cream in there… 🙁

While we initially wanted to make the Italian icecream for dessert (and don’t worry, we will be making that before the year is over.. 🙂 ) we figured a little lighter then that would be advisable. It’s weird really that most christmas dishes are rather heavy on the stomach; we had to really make adjustments from our original menu to the current one to make sure that we didn’t have to roll every one out the door. I don’t know about you but I don’t particularly like the overly full feeling that you get after eating too much. I do – in fact – hate that feeling and while I am the only one to blame for that feeling when it happens to me, I would like to think that I try to avoid it as much as possible. So we made a few adjustments to the final menu; some things were cancelled, other things were added. No potatoes at the main course; the cream leek tart will be more then enough even without potatoes. And a nice fresh salad to go with the ham and the tart and then for dessert a pannacotta. While the pannacotta is arguably not exactly leaner then the Italian icecream when you count it in calories; it does feel lighter due to the smaller portion and the fact that I will be changing the recipe that I followed for the above cranberry version. I am going to add the buttermilk in. 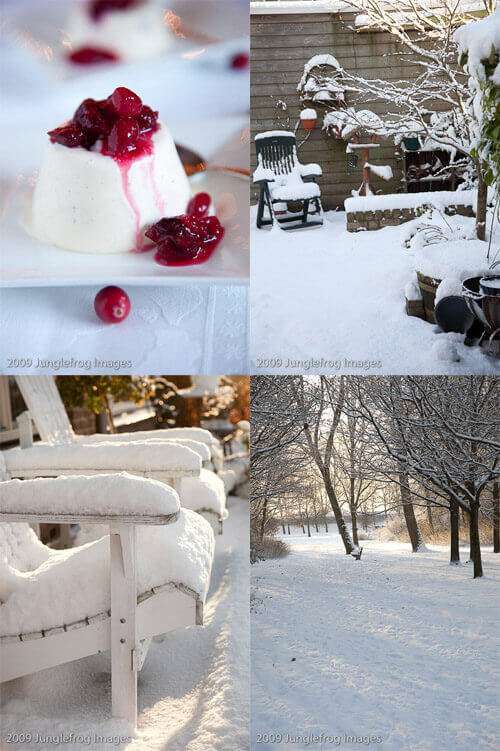 The lemon buttermilk pannacotta that I made before is perfect in that sense; due to the tartness of the buttermilk it looses some of it’s rich creamy texture making it fresh and light. And then I will add the cranberries to it for that seasonal feeling (and because I love cranberries too ofcourse) I will make them a little sweeter then the ones we use for the ham to counter balance the lemon and buttermilk. Hmmm, lovely… and that then is our christmas menu complete!

I will give you below the recipe for the original cranberry pannacotta which I made yesterday. If you make it I would advise adding a little lemon or some other sour tasting flavor to pick it up a little.

Yesterday it has been snowing almost the entire day resulting in a big pile of white fluffy snow today and when the sun broke through the clouds this morning I just had to go for a little walk in the park across from our house. Isn’t it beautiful?? Too bad that it will probably not last until christmas. It’s gonna be melting starting tomorrow… 🙁 O well, we had fun while it lasted, although it’s a nightmare for traffic ofcourse. Our little country is not equipped to deal with things like heavy snow or frost; everyone is in a state of panick, trains, trams and buses no longer operate due to frozen tracks, or whatever else happens and let’s not talk about the traffic jams!! Yesterday, a sunday no less, we had a total of 1200 minutes traffic jam and 90 traffic jams altogether. On a sunday! Imagine what would’ve happened if yesterday had been a monday.

Thanks to christmas holidays the traffic was bad but not as bad as it could have been on a regular working day. I was supposed to have a photoshoot with two kids wanting a portrait for their parents, but they had to come from far and well… the trains didn’t run so…. I had the morning off to enjoy the sunshine and the snow.

Here is the recipe for the pannacotta! 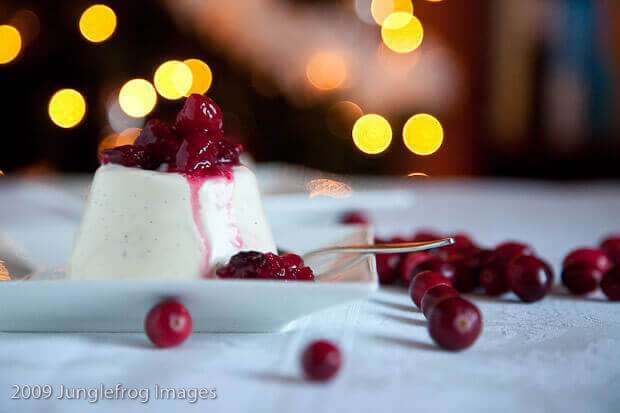