Delicious and easy to make low carb bread filled with chicken, olives and fresh herbs. Perfect to take with you on the go or to have as a lunch with a big green salad.

With all the shoots that I have had recently (for an AIP health coach) I had quite a few ingredients left over. We always try and use whatever we have left and divide it among the crew. However, it can still be way too much for once person. I don’t know why I had so many leftover either. Probably I am not the best grocery shopper..

Anyway I had loads of chicken, cassava, chufa (tigernut) and many many eggs. After my workout in the morning I started playing around with the idea to create something new.

Since the ingredients I had were mostly paleo or AIP proof I figured I make something low carb. I had chicken thigh fillets and as I said many eggs. I wanted to create some kind of low carb bread. I previously had made something similar that was not paleo. It has cream and cheese in it. Also delicious but like I said not what I wanted to make.

I used tiger nut of chufa here which is a delicious flour that has nothing to do with actual nuts, but has the same working as almond flour. So if you have a nut allergy you can still make these. If not, and you want even less carbs, you can substitute the chufa for almond flour in this low carb bread.

In order to give it some extra flavor I added some homemade pesto. Obviously if you make pesto the traditional way it would include cheese. Now I love cheese so I have no issues with that, but you can make a paleo version of the pesto if you so prefer. Irene Macri has a delicious dairy free pesto you can use.

I also like to add a bit of harissa in, just to give it some extra kick.

To make the low carb bread you start by preheating the oven. Then season the chicken to your liking. I used plain salt and some extra spices in a ready made mix. There are no additives in this mix and it is pretty tasty, so I use it a lot for easy chicken.

I made the batter using the eggs, chufa, a bit of coconut milk, flax seed and spices. I also added fresh herbs from the garden.

My garden recently got a complete make-over so I now have fresh Thai basil (my favorite!) as well as parsley, rosemary and thyme in my garden. They are growing insanely fast with the current weather conditions, so I better start using it more often.

And the low carb bread with chicken was the perfect excuse. The batter is pretty liquid and can be easily poured into the muffin tins. Bake for about 30-35 minutes and you’re left with delicious and simple low carb bread. You can freeze any leftovers which makes it even easier to bring along. 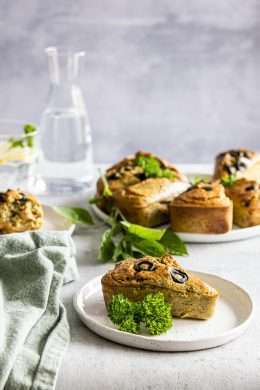