What I try to do each week is to plan our meals a bit so that we at least have some decent food. The reality is that our lives are quite hectic so it is sometimes just not feasible to prepare a good meal and still do all the things we want. In my line of work it is sometimes necessary to work evenings, weekends or other hours, while Tom loves to go fishing with friends. Fishing is apparently essential to do as early as possible in the evening (after he comes home from work, which has fairly normal working hours)

So if you look at a typical evening such as we had yesterday, that means that he comes home around 6 pm and this particular case I had to leave at 6.30 since I had a family photoshoot in the studio at 7.30. Leaves precious little time for a normal meal!

I had set my mind to make a recipe of Jamie Oliver’s book “Cook” which involved pancetta, asparagus and monk fish. Tom had promised to be home early, so I figured I could still make the dish… Taking a photo of it would be nice, but if I could find the time… was doubtful.

I bought the fish in the afternoon which was incredibly expensive by the way (18 euro’s for about 500 gr. of monk fish-fillet. It still had to be made into a fillet which meant I had to pay for the entire fish and not just the fillet)

The recipe calls for pancetta, which of course I could not find anywhere around here, so had to do with regular smoked bacon.

All in all Tom was still quite late or at least later then he said the day before so it was a bit hurried but at least we still had a lovely meal. I did take three photos in a hurry so the styling is not exactly how I had wanted it but still half decent…:) The recipe is definitely worth a try and you can choose cheaper fish such as haddock, whiting or hake, which funnily enough my fish market didn’t have yesterday.

I also love these alaskan style fish and chips. 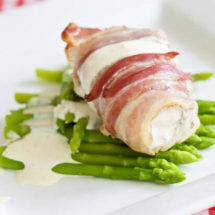