Last year around February I saw an undercover documentary about a Belgian slaughterhouse and it shocked me to the bone. So much so that I became a vegetarian overnight. I stopped eating meat for the next 6 months or so. I just couldn’t justify being part of the treatment of living beings like that. And trust me, if you haven’t seen it, don’t. It’s horrific. Of course as you probably guessed I couldn’t keep it up. Eating mainly paleo and vegetarian can go together but it is not the easiest choice. Plus I missed having the options and on top of that I also create recipes for other people. So eating meat is almost a necessity.

I was already conscious of what kind of meat I was eating but ever since last year I’ve been more strict in that regard. I eat only meat from animals that lived a relatively happy live. Grass fed and organic. But even then you do not know where they actually die. How are they slaughtered and where?

This week another report came out stating that the situation in Dutch slaughterhouses is not much better than those in the Belgium one. Serious animal cruelty is performed where they skin animals while still alive, cook pigs while still alive and more of that. It has created a storm of protest which I think is a good thing. It has also made me even more aware that I have to be careful where I get my meat. I found a really good source of meat here in the Netherlands. I talked to them extensively on how and where they slaughter the animals and it is in no way related to anything that is done in the mass production areas.

Still, somewhere in the back of my mind, I struggle with eating other creatures. I would go vegan if I thought I could manage and/or if it was sustainable for me. We don’t really eat a lot of meat. Mostly chicken, some seafood (not enough of that!)  and some other bits and pieces.

How do you justify eating meat? And what is your routine if you don’t?

The recipe I am sharing with you today is for breakfast burgers. Yes that is right; meat for breakfast. Talk about not eating that much meat… But these are delicious and perfect for when you’re doing a whole30, like we are doing right now. Thanks to the mango that is inside they have a hint of sweetness making them perfect for your first meal of the day. You’ll love them!

Not so much into meat in the morning? Try this fritatta with roasted vegetables 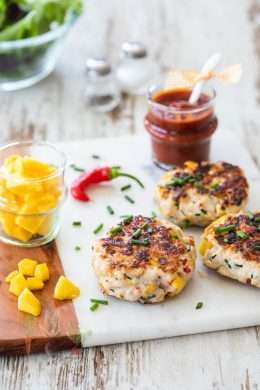