Making your own sunflowerseed butter

Making your own sunflower seed butter

In a long ago and dark past (…) I had no idea you could make “peanut butter” from virtually all nuts. And that it is – in essence – rather easy to do too. I found out somewhere in 2010 during a  Daring Cooks challenge where I learned how to make almond butter. I do wonder what’s with the ‘butter’ in the name? It’s nothing to do with butter as far  as I know. Different process, completely different texture, different taste, so why the butter? Anyone know?

Even worse, here in the Netherlands we do not have peanut butter. We call it peanut cheese… (if you would translate it literally) That’s even weirder!

Anyway, I find it completely illogical but it could be me. The good people of the whole30 decided that peanuts are bad for you. Or maybe not so much bad for you but they could be the cause of certain allergic reactions in some people. You see, a peanut is not a nut at all. It is a legume and as such can be the cause of irritation in your bodily systems.. 🙂 And because the whole30 is meant to eliminate all possible allergens peanuts are off limits and with that also sateh sauce.

I did, however, see a rather good looking recipe in the book Well Fed 2 by Melissa Joulwan. It’s a book filled with good looking paleo recipes who are also mostly whole30 approved.

So what did I need for the recipe? Sunflower seed butter… Not something we have here in the supermarket so a little search on the internet brought me a couple of goodlooking recipes one of which from Sonia, the healthy foodie. I know her recipes are always right so I followed it along and voila; sunflower seed butter. It does take a bit of time to make but it is super simple. The taste is a tiny bit more bitter than you are used to in peanutbutter. I will be trying to make a sort of peanutsauce with it soon. (that is called sunshine sauce… Gotta love the name!) For now the recipe for sunflowerseed butter. 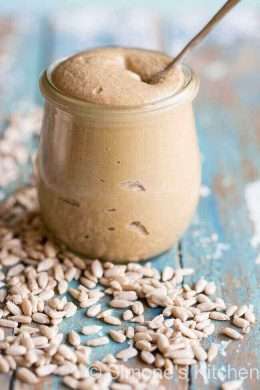 3 comments on “Making your own sunflowerseed butter”