It’s June already and this Dude doesn’t like it one little bit. Over here in Holland the weather should be hot and summery already, but it’s still rainy and frigging cold and windy. At this time of the year I should already be outside and BBQ big and beautiful chunks of meat for 4 to 5 days a week. But the weather gods decided to become vegan, I think. For instead of sun and warmth they send me storm and rain. When I want to BBQ outside I have to nail my meat to the fence because otherwise it would fly away like a fleshy kite. And when I want to fire up the BBQ, the wind blows in it and my neighbourhood becomes a modern Pompei with all the ash that blows from my garden. It just ain’t funny.

Last weekend I went out fishing with my best friend and I nearly drowned in a boat. Drowned.. IN a boat, because it was raining that hard. And you can’t take shelter from the rain when you’re in a boat. It just ain’t fun. I have to admit that I’m no die hard Dude that goes out to BBQ in the rain under an umbrella. I just think that’s lame, because BBQ is a nice weather activity… Dude or not. And when I can’t have my BBQ in June I want to have comfort food. Those traditional pies with meat and such, like the toad in the hole. What’s more comforting than sausage and Yorkshire pudding pastry with a buttery onion gravy? Yummie.
But alas, not for this dude, because the Misses still is on a ‘no grains, no dairy, no sugar rampage’ diet and when I just think about Yorkshire pudding, I am sure to have a miniature Misses Nova at home.
But maybe I can sooth the savage diet beast by adjusting the recipe to a paleoproof version of toad in the hole. Like a kind of paleotoad in the hole. Sounds prehistoric, but is actually quite new.

If I succeed I have the best of both worlds; my own comfort food and still a dish that fits into this paleo diet. Seems that rainy days can make a Dude creative. Or even better: when it’s raining cats and dogs, revisit the toad in the hole. 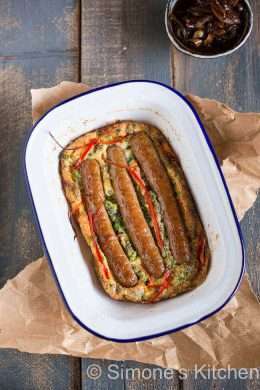 Paleo proof Toad in the hole

The traditional Toad in the Hole pie, but with an adapted recipe to make it Paleoproof
Prep Time: 5 mins
Cook Time: 40 mins
Total Time: 45 mins
Servings: 3 -4

For the onion gravy: