Steamed rice cakes Nom Kom and how not to make them

The basic idea of these steamed rice cakes is delicious. I made a few wrong decisions but in the base this is a really tasty recipe.

I always think that no matter what the missing ingredient is for a certain recipe, I can make it work with whatever I have on hand. And usually that is not such a bad way of thinking either as it generally gets the job done and has given me some surprisingly delicious new recipes in the process.

However when it comes to rice flour I do not have a very good track record. Remember I made the pretty steamed rice cakes before where the first attempt wasn’t too successful either? This was kind of a similar thing… Maybe it is the combination of steaming and rice flour that short circuits my brain…

The recipe is from Cambodia and these (normally pretty) little cakes are traditionally used for  ceremonies such as weddings. Nom kom symbolizes womanhood to the Cambodians. It is also traditionally supposed to be soft and sweet, not hard and chewy.

First of all I decided that I could use regular rice flour instead of the sticky rice flour the recipe called for. Secondly it told me to use freshly grated coconut but I did not have a coconut lying around so I used the dried variety and figured if I added a little extra water and a bit of coconut I could sort of make it resemble fresh. The dough came together fairly well, even though I kind of felt that it should have been a different texture, but I thought it would work. And well it did work in a way, just not the way it was supposed to.

Which goes to show that practice makes perfect right? Then taste…. I did NOT add enough sugar into the dough for the steamed rice cakes and/or the coconut mixture. So it tasted mostly bland. I fixed that by making a little mixture of brown sugar, cinnamon and cardamom with a sprinkle of sesame seeds and voila, I had sort of a dip, that made it all taste quite good! Maybe not anything a true Cambodian would put out on the table but still quite good for having a little dessert snack mid-day.

I highly recommend you do not follow this recipe but if you must…. here it is! The quantities given in the recipe are just a guideline. It’s not very difficult to follow so if you feel you need more or less just use that. 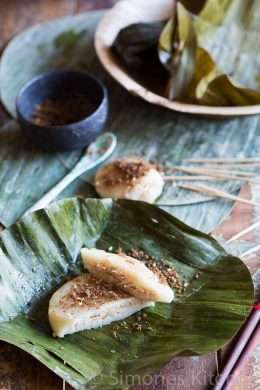 Print recipe Pin Recipe Save as favorite Saved!
5 from 4 votes

The original recipe calls for using sticky (glutonous) rice flour and freshly grated coconut. It also mentions to smoke the coconut filling to create a unique flavor to the dish. That would have taken hours and required bees wax. I went without that process too. So the below recipe is my version of the original and – you've been warned – it's a bit flawed!
Prep Time: 40 mins
Cook Time: 15 mins
Total Time: 55 mins