Last week I was out for dinner with my friend Hermin and we got to eat at a restaurant called “Entrecote et les dames”.  Now the funny thing is that this is a restaurant were you can only get two dishes. I guess it will come as no surprise that one of those dishes is entrecote. The other being fish; if you really cannot eat meat. The concept is fairly simple; you choose fish or meat and that’s it. Starter was a salad. Again delicious in it’s total simplicity (saladleaves with dressing and walnuts. Delicious!) and then you get served the entrecote. Initially we were a little shocked at the small piece of meat on our plate, but as it turns out they do that on purpose to prevent the meat going cold. The serve it in parts. Once you finish part 1, you get part 2. And since they have all the time to perfect their meat… it was absolutely delicious. As were the fries that went along with it. Now we also had a quick peak at the dessert card and both felt like having a dessert. Hermin picked the chocolate mousse and on recommendation of the waitress I picked the lemon meringue pie… And o my god, that was soooo incredibly good that we were both tempted to have a second serving (my friend had some of my pie wishing she had taken the same) We didn’t go for the second serving since we had had enough to eat already and also discarded the idea to take one home in a doggy bag… Instead I promised her I would try and recreate the dish to the best of my ability.

I also had some ready made dough in my fridge which I needed to use so this weekend was the perfect time to try and make the lemon meringue. Our friends in Belgium had been kind enough to get us three packages of ready made, rolled out dough of the kind that we cannot get here (or I haven’t been able to find it) and while my search was mostly for puff pastry in a larger piece she got me two other kinds as well. Crumble dough was the one I picked for the meringue.

Since I didn’t have to worry about making the dough I could concentrate my efforts on finding a good recipe for the filling. Obviously there are many lemon fillings to be found, but I wanted the one closest to our dessert at the restaurant. Basically the filling was very strong in lemon flavor so a lemon curd type of filling would do the trick. To counterbalance the sour taste of the curd it was topped with a meringue and then quickly baked in the oven to get a brown color on the meringue. 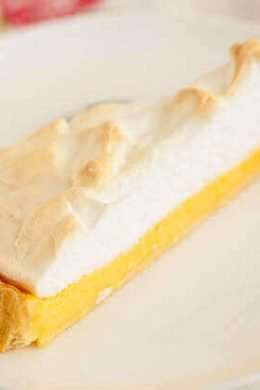 For the lemon filling