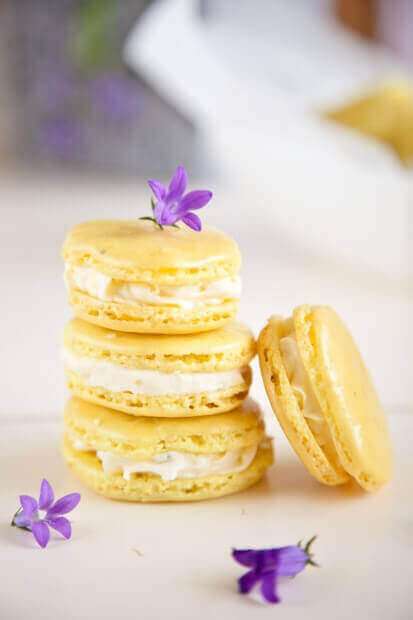 It’s been a while since I made my first macarons and since this evening we are going to visit my parents in law I figured it would be a perfect day to make a new batch of these delicate cookies. I think officially I am not supposed to call them cookies, but for lack of a better word…

The first time I had successful macarons (I am not counting the first failed attempt) I had made a filling of chocolate ganache and while that was truly delicious I did think it was a bit heavy. After two macarons we were feeling very full, so this time I wanted to attempt something a little bit lighter in taste and texture. I still had a jar of mascarpone in the fridge and had bought fresh limes and lemons at the market this morning. And since I love lemon I figured that would be a perfect filling for the macarons. I had incorporated a little bit of lemon zest into the meringue while making the macarons and added a tiny bit of yellow powdered coloring. Ofcourse a tiny bit of that very potent powder means that my macarons are bright yellow instead of the more subtle color I had in mind, but ok… I really have to get a better feel of how much is needed when it comes to coloring the macarons! I go from bright pink to bright yellow! 🙂 Nevermind; the meringue did have a slight hint of lemon taste which is what I wanted to achieve.

Getting the mascarpone to the correct taste I had to add quite a bit of lemon and lime zest plus some juice of both. O and I added a bit of lemon curd as well that I still had leftover from the Daring Bakers august challenge. 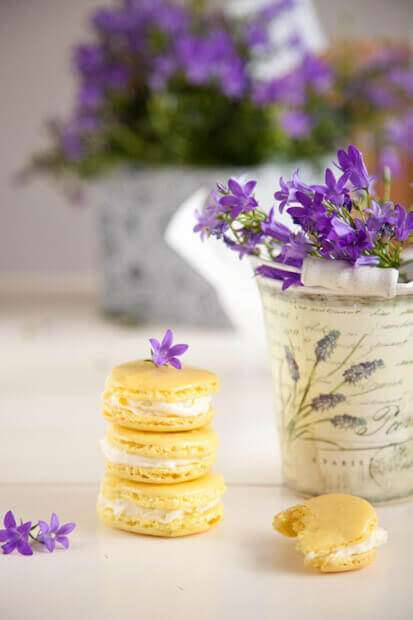 As for the macarons themselves… hmm, not so successful! While baking them I could tell that the top of the macarons became a bit wrinkled almost. Not smooth as they were before putting them in the oven. I had rested them for an hour prior to putting them in the oven. Could that have been too long? They also didn’t rise as good as the previous time and getting them off the parchment paper was a nightmare, to say the least. The ones you see here are the only ones that came out in one piece – more or less. As I have mentioned before; my oven is really not the best and doesn’t warm evenly. The macarons at the end of the oven where ok, they came of the paper the easiest. But I couldn’t keep them in any longer as the shells began to brown a tiny bit. But the ones on the other end of the oven where no where near done.

Other then buying a new oven (which is in the planning, but you know how those things go) I am not sure how to solve the oven issue.

As far as taste goes, they were totally delicious but they are hardly something I can bring to my parents in law this evening. It’s mainly all broken bits and pieces. I am sure they will still eat it, but well, I am sure you can understand why I don’t want to bring them!!

A bit disappointed… but no one ever said that making macarons would be easy right? I do think I overbeat the meringue possibly. Initially it was too thick as the meringue didn’t flow in a thick ribbon from the spoon, but rather in chunks. So I gave it a few more folds, but that was maybe a few too many? On to attempt number four then… 🙂

For the mascarpone filling I really just added it to taste but it was more or less the below quantities:

juice of 1 lime and halve a lemon