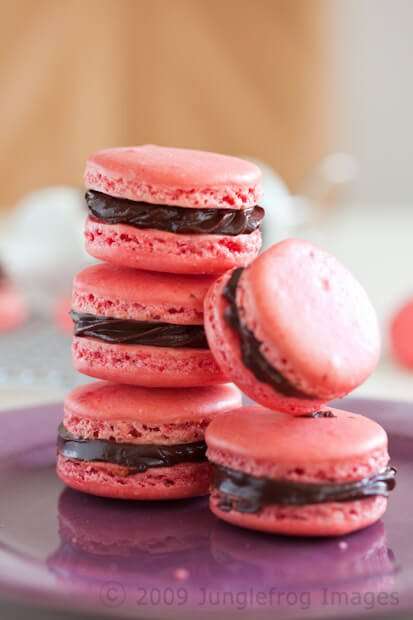 Whoohoo!! Ofcourse I could not resist making another batch of macarons yesterday as I really wanted it to work better then the first attempt. I had received full instructions from Helen via an article she had written previously for dessert magazine (look on page 38) and following those… I got the above results! The whole French method is sooo much easier then the Italian one I did previously that I was pleasantly surprised.

I had gone to Amsterdam in the morning to buy ground almonds (I bought a kilo…. so more macarons to follow… 🙂 ) and a tip that would be in the right size, so I would not have so much issues with the piping bag. In the end I used whole almonds and ground them myself as I had bought those previously and ultimately I needed to finish those before the ground ones. I didn’t really have old eggwhites so I used Helen’s recommendation to microwave them for 10-20 seconds before using them as that apparently replicates the effect of using old eggwhites. 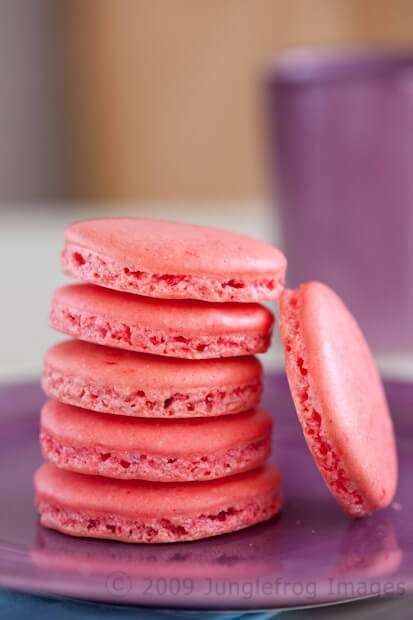 I had also bought powdered coloring of which I used a bit too much. You need just really a tiny amount to get any color into the meringue. I had never used powder before, but I know for next time now.

As for the taste; they were good although I would say not quite there yet. Compaired to the Italian version the French ones use less almonds (the previous recipe had 200 gr powdered sugar and 200 gr almonds, while this one had 200 gr powdered sugar and 110 gr almonds) so I found the taste to be a little bit more sugary. I am not sure if it is save to experiment with the sugar/almond combination but I might try to do that for next time, or add some other nuts to the mixture which I am sure will work really well as well.

I also found that the recommended 12-13 minutes was not enough. I ended up letting them bake for about 25 minutes before the bottom was firm enough. I think that was the mistake  I made the first time as they did not want to come of the parchment paper. Keeping them in a little longer was all that was needed. (we do have an oven that is not really working as it should, so that is possibly one of the reasons)

For the filling we used chocolate ganache with no other additions and that was delicious but rather heavy as well. I have some left over which I will fill with something else just to see how that will compair with the taste. The chocolate was almost too overpowering…

All in all I am really pleased with how my second attempt turned out and they really were delicious!

I was right by the way, about my friend laughing really hard about my first attempt…. 🙂 I bet she was here now to taste my second attempt!! 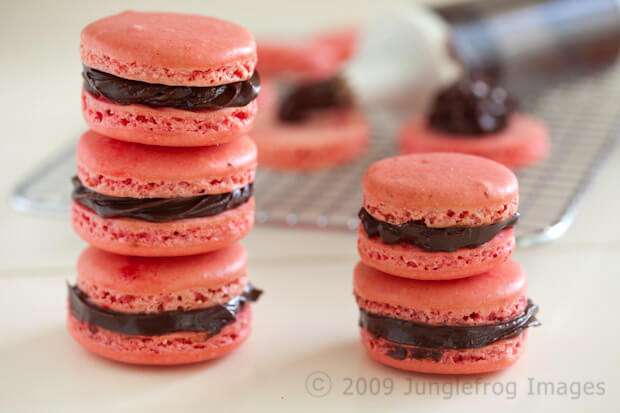 For the recipe I followed click on the link above to Dessert Magazine and have a look at page 38.

Next thing I will be doing is trying to experiment with the flavours and getting it to be perfect. Varying with the filling as well. 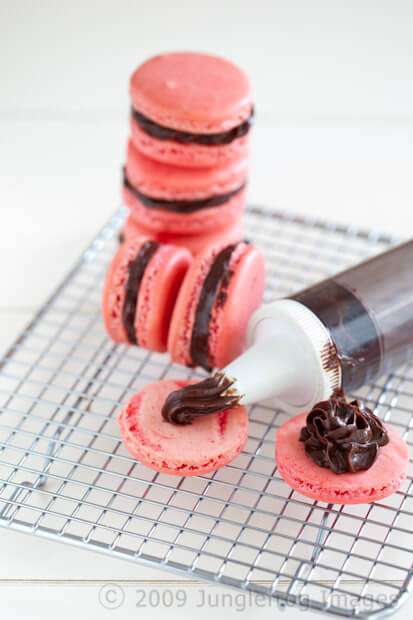 O and let’s not forget the practising with the right size as these were a bit on the large size really and definitely not all the same size either. That’s the least of my worries though. Taste and flavour is most important. I am sure getting them the right size is gonna be a thing you – hopefully – learn over time!