Focaccia with three flavors and BBQ 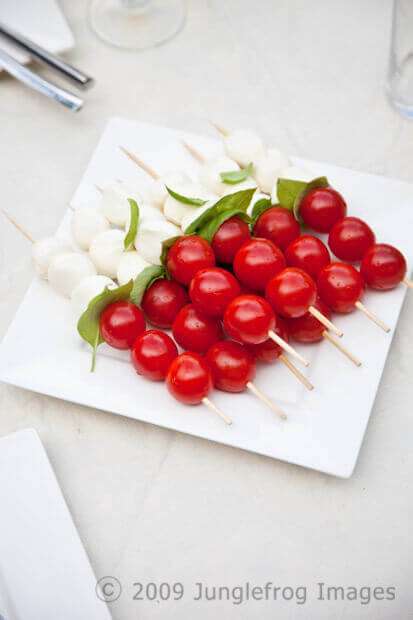 How terrible is it that it’s now august and this is actually the first time that we had a BBQ!! Ridiculous but true. You now how it goes right? Once the weather is finally good enough to eat outdoors, you have previous arrangements, appointments, have to work or whatever else tends to get in the way. So we had planned this barbecue about four weeks ago with friends. And as luck would have it; it was a perfect day to have a BBQ!

I had seen the salad idea on Dishing up Delights this week and I immediately loved the idea. I had been thinking on what salad to make, as a bbq hardly ever seems to be about the salad, so you spend time making something but no one eats it. Too busy being a carnivore I guess. But these were absolutely delicious. I had quite a lot of basil in the garden which looked terrible due to slugs, but was still perfect for making fresh pesto. (don’t worry I did wash it carefully!) Don’t they look pretty on a stick? Ofcourse you can make this in a bowl as well, but it just looks very cute on the skewers.

Peter, from Kalofagas had some pretty good instructions for making spareribs which we followed mostly. I never knew there was a silverskin on the ribs that had to be removed for instance! But then again, we had never done any spareribs on the bbq before. Well, that’s not entirely true. We have eaten spareribs before, but those were always the premade and pre-marinated things. These we bought at the butcher ourselves (those things are ridiculously cheap!!) and then rubbed them with two different flavours which we left overnight in the fridge. We then baked them in the oven covered in aluminium foil for 1 hour and 15 minutes and baked them on the grill to finish it off. But we should have paid attention to the fact that our ribs where not so big, so the oven time was too long and I think the guys also left them too long on the bbq so the end was tasty but a bit too dry. But we will definitely be making those again!!

We also had lovely gamba’s which we had marinated in garlicoil combined with hmm, a few other ingredients I have forgotten about and cod wrapped in smoked ham. Delicious!!

I always think that the problem with bbq is that you end up buying way too much food. But then you want people to have a choice right? You don’t just give them ribs and that the end of the story. But most of the meat we left in the fridge, so the freezer is now filled with the remainder of a splendid meal.

I had also read about a focaccia bread (Jamie Oliver recipe) with three different flavours, so I had been baking that in the morning. Absolutely delicious and a big hit too. The bread has red onions which you fry in balsamic vinegar giving them a lovely sweet taste. Then cherry tomatoes cut in half and dressed with olive oil, salt, pepper, a little white wine vinegar and garlic and to top it off, one part with taleggio, goatcheese and parmezan (my favorite part and apparently everyone elses too, as it was gone the fastest!)

Here is the recipe for the focaccia bread: 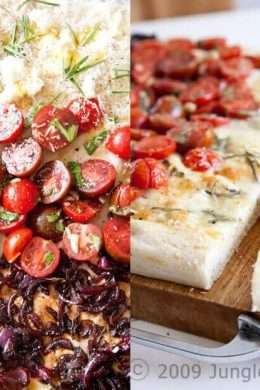 Print recipe Pin Recipe Save as favorite Saved!
2 from 1 vote 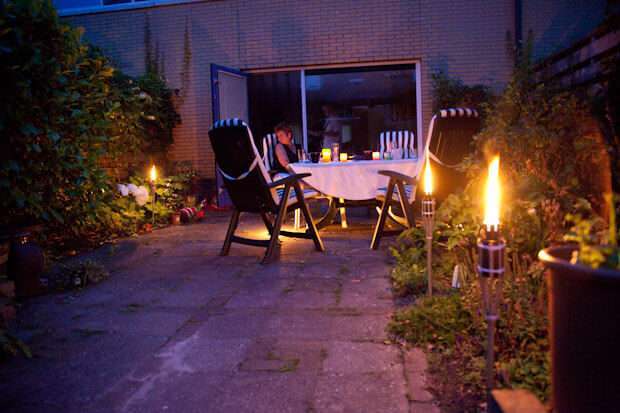 For more ideas on what to do with your freshly grown herbs have a look at Jaden’s at SteamyKitchen, Whiteonrice couple, MattBites or AwaytoGarden who are hosting the Summerfest!