Recipes » Basics » Basic chevre (sort of) – making your own

Basic chevre (sort of) – making your own 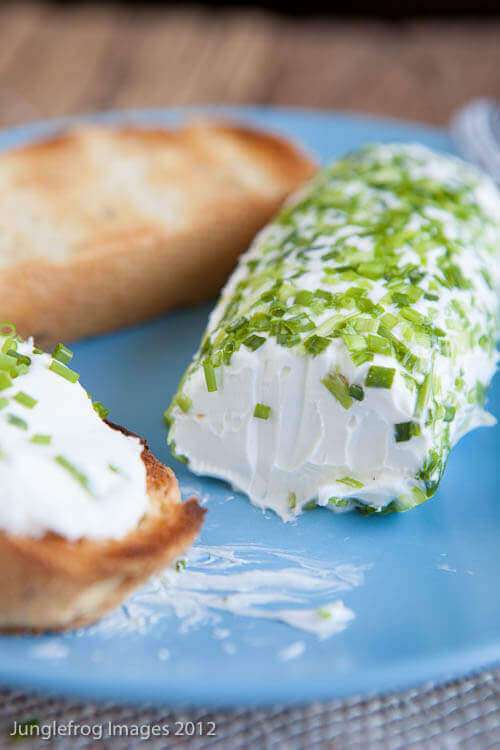 After the very successful ricotta making of last month, I figured it would be a hit and run again for this month’s chevre or goatcheese. They’re pretty similar in structure I thought so what could go wrong?

Well…. you can start by getting the wrong milk. That’s one thing that can go wrong! You see, instead of me going to a proper goatfarm and buying a bottle of raw goat’s milk I searched on the internet on where to find goatmilk and voila, turns out they have it at our local supermarket. So why drive across the country when you can just walk to the store. Right? WRONG! 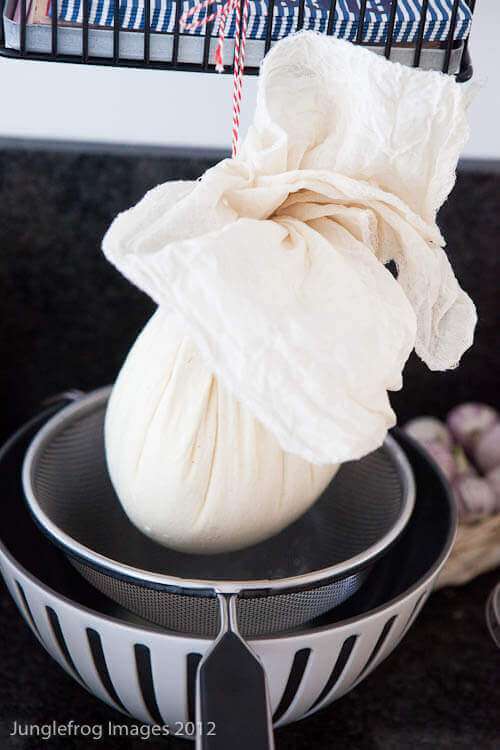 The recipe of Mary Karlin states to use C20G mesophilic starter for adding to the goatcheese but I couldn’t find that, so I opted to go for the recipe by Valerie which uses buttermilk and rennet.

Now the first part of the process went quite good. I heated the milk according to instructions and left it in the oven (not turned on) for 12 hrs. It was a bit mass after that time and I dumped it into a colander lined with cheesecloth. I was all excited by that point and convinced I would have a perfect chevre the next day. 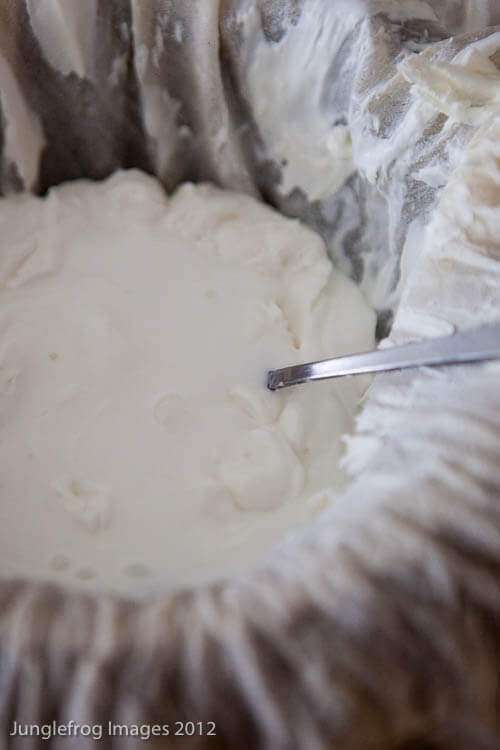 So far so good. (As I later learned from Ian, I should have broken up the curds before putting it in the colander to start the draining process.)

According to Valerie’s recipe the chevre should be about done after 6 hours, so since I had left it overnight I figured it would be fine in the morning so I checked… Mmm, it still had the consistency of yogurt. Not looking like cheese at all! At that point I started to wonder if I had maybe used too much fabric for the cheesecloth, so I poured (it was that liquid still) the curds into another cheesecloth and put it back in the fridge. 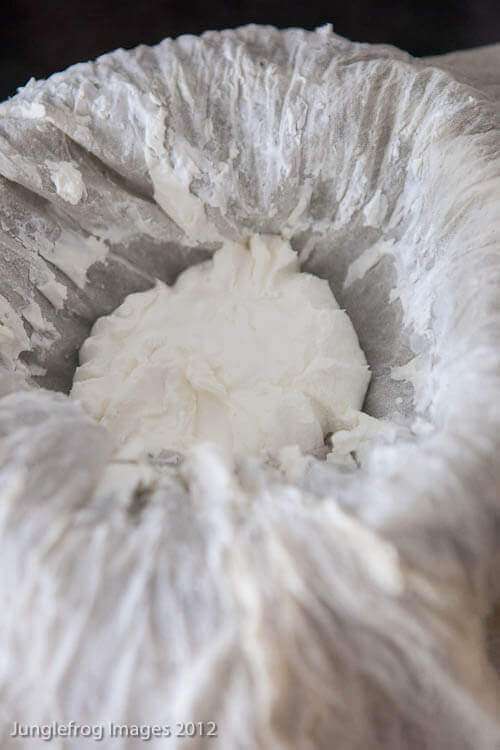 I then contacted Valerie and told her of my attempt. The first thing she told me was to get it out of the fridge and to properly hang it. Mine had not been hanging at that point except for maybe a few hours. So I took it out of the fridge and hung it on the kitchen counter. Every half day I would open the thing, peer inside and give it a little stir, which usually meant there was more whey coming out. And then left it hanging again. 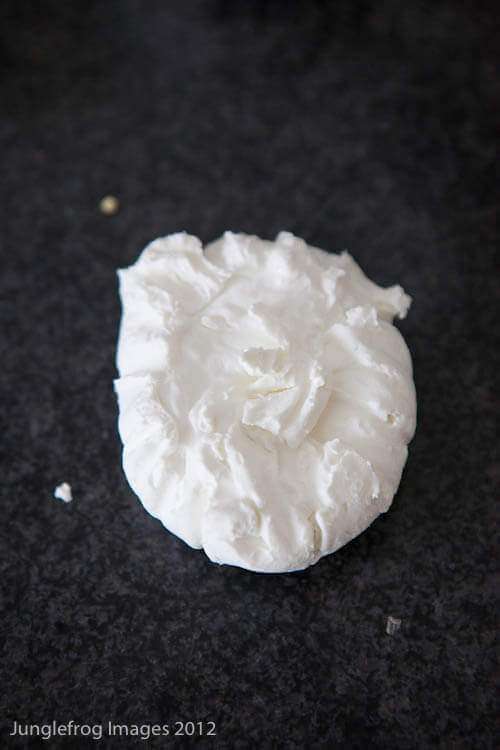 I started to think it would never come together as it kept being really liquid and then yesterday by the end of the day I was starting to get a few bits and pieces that were a bit drier. And then this morning it was the consistency you see in the picture above! Yay! It’s by no means a perfect goatcheese but… it is quite good in taste. Which is surprising considering the milk I used.

As you can see it is still very moist and picking it up and handling it was quite a sticky business.Every time I had done some stirring when it was still hanging I also added a bit of salt in, so tasting it after, it didn’t really need much extra so I just gave it a tiny bit and then rolled it in chives , wrapped it in plastic and then set it in the fridge. 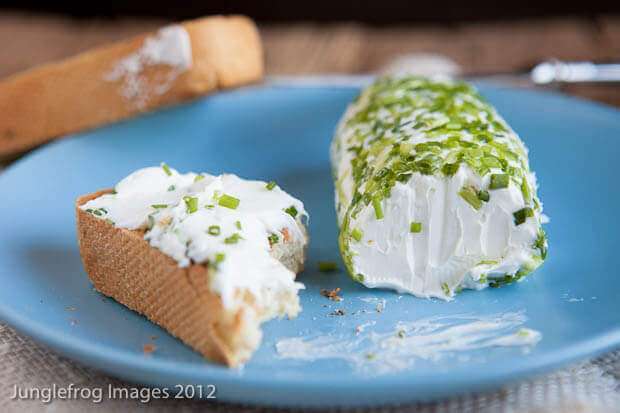 So overall I am not unhappy with this chevre. It is by no means perfect but it’s a start. I have now found a source for proper goat milk and the plan is to go there tomorrow and get a few liter raw goatmilk. Now as it turns out this farm also has workshops goatcheese making and while that is only in November, I just send them an email asking if there is still room for 2 people to join… 😉 Learning from the experts would be fun! 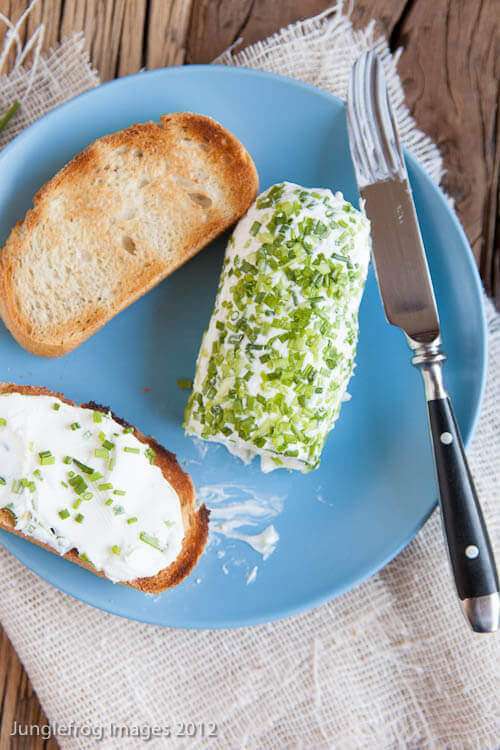 Now on to the tasting notes

For the original recipe it is best to check here on Valerie’s site, but I will give you the details of how I made it with the milk I picked etc and how long it took me to make 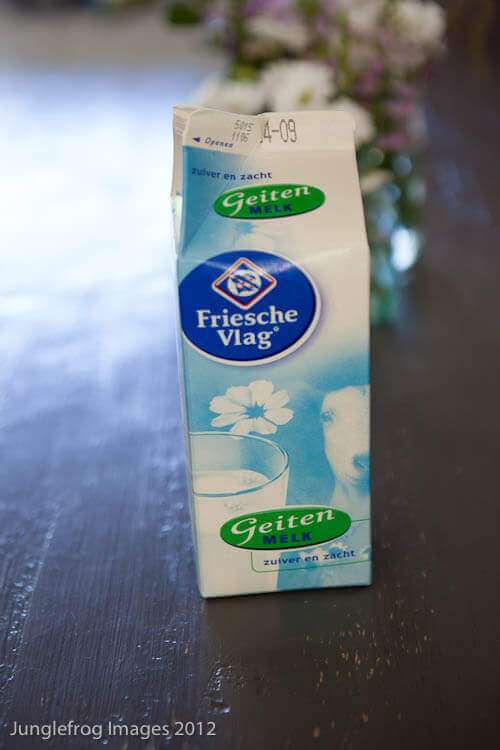 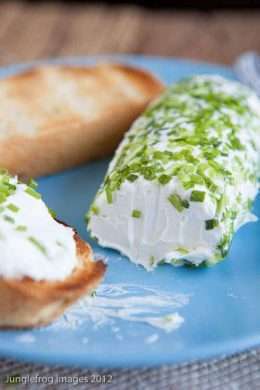 You need for this exercise also a thermometer that is accurate. Cheesecloth. A large stainless steel pot to heat the milk in. A colander or sieve to drain the curds. String to hang the curds with
Prep Time: 30 mins

This post was part of the Cheesepalooza challenge where we had to make  a different kind of cheese every month. Our basis and guide for this whole process is the book Artisan cheesemaking at home By Mary Karlin.

3 comments on “Basic chevre (sort of) – making your own”