¡Hola, amigos Dudicos del mundo! ¿Qué tal? ¿Tambien se siente apetito en comido muy macho? When I starte speak Español, you all know this Dude is in a fiesta mood.  No suprise I want to party because  we have an anniversary to celebrate. Yup, it’s the 40th Dude Food Tuesday already. Time flies… and the Dude Food recipes too! Anyway, the 40th Dude Food Tuesday is reason for a party and who can make a better fiesta than Los Mexicanos? And of course with foodos Mexicanos deliciosos. Today we try to lift the taco to an even more dudey level.
Not an easy task, because the taco is a very Dudeworthy dish in it’s own right. And it should be manly beacause of the macho meat, the ‘some assembly required’ and the ‘must eat with hands’ character of this dish.
And still we wanted to upgrade this menu for machos. Fortunately I’ve had some help from some masters in Cooking and professors in Dudaïsm. I assembled a team a scientists and specialists and the recipe for tacos has been analysed and studied on the University of Dudevard, with the sole purpose of elevating an already very dudey recipe to even more Dudiness.

We’ve had our own Doctor Dude on the task and he worked together wit Heston Dudenthal from Britain. The two made a starteling an groundbreaking discovery in drastically imporving the manliness of the taco recipe!
They deduced that a taco would become that more macho when you fried the taco together with the filling. It would increase the dudiness of the dish with at least 25%!
The two brilliant dudes honored me in sharing the recipe with you. In this case a duo of tacos with a filling of both beef and chicken.

One word of caution: these tacos are that fingerlicking good, you have to be careful you don’t eat your fingers with them.
Enjoy… 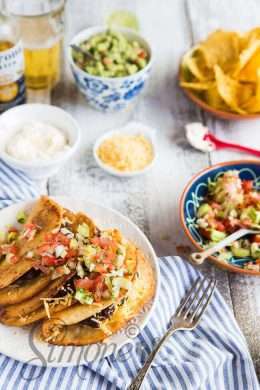 For making the salsa:

To dress the tacos: