Dudefood Tuesday: We want Hassel back Happy New Year!!!
You probably heard this one hundred times already this week and all the Dudettes and Misseses have been kissed countless times for best wishes by those men you try to avoid for the best part of the year. Everybody knows those guys (most often your boss) that lurk behind the coffee machine at the office waiting until you come around for a cup of Joe. And just when you think the coast is clear he jumps from behind the coffee machine and giving you his best wishes while donating some wet and weak kisses. Always nice to start a new year with a small trauma. The first week of a new year is always a great occassion for the boss to slap out a few moist kisses.
Speaking of bosses: you know who was a real boss back in the days? David Hasselhoff.
Especially during the Knight Rider series, he showed the world what it was to be a real dued. Macho, elegant and witty. The aspects of a genuine dude.
Those were the days of The Hoff.
Nowadays Hasselhoff is the example of the rise and fall of a dude. For after his adventures with his talking car, Kitt (my, oh my, that was a dudey car!) he rapidly fell from Dude grace. After Knight Rider we saw him running around pointlessly on a beach with that red or orange banana underneath his arm. I liked his female colleagues in Baywatch a lot more than Mr. H.
Don’t get me wrong, he is a fine actor… just a shame he doesn’t like a stiff drink. I even thought the saying: ‘The man, the myth, the Hoff.’, was funny and a little dudey.
Too bad David was the one who cried and yelled it all the time and no one else.
Yep, this burned away the last piece of Dudiness for Mr. Hasselhoff.
And when I see David trying to be a referee in an all American talent show, looking blurry eyed and trying to recall his rehearsed witty remarks, I know the old David (the Dude) Hasselhoff is gone for good.
A lot of dudes will agree that we would like to see the old and macho Hasselhoff again. We want Hassel back!
Even when he talks to cars through his watch.
To bring you some slight comfort I will bring a little Hassel back.
In this case with Hasselback potatoes: crunchy on the outside and buttery soft and creamy on the inside.
The idea struck me when I flipped through a Jamie magazine and read his recipe for Hasselback potatoes.
thought his version with gorgonzola and honey was too sweet, so I gave a Dudey twist to it with a filling of cream cheese and crunchy chorizo.
Enjoy this recipe with my best wishes. 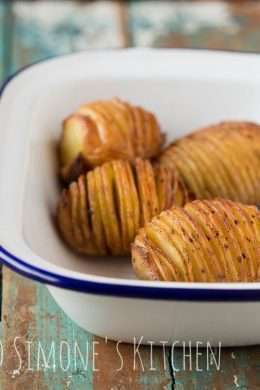 Potatoes from the oven with chorizo

« Previous PostSlowcooker : Stew with prunes and cinnamon
Next Post » Oatmeal with orange and coconut milk

4 comments on “Dudefood Tuesday: We want Hassel back”