These times are dark times for this Dude. Vacation; everybody is full of it and in a big holiday mood.
But in stead of full this dude feels empty and his mood is more moodY.
And all because I am on a Paleo diet for almost four weeks already. So concerning holiday feelings and Dude Food I am on the bread line.
In fact bread is strictly forbidden in a Paleo diet so I am less than on the bread line. I miss all my favorite ingredients. I am in dire need of DKI’s (short for: Dudey Key Ingredients).
I miss DKI’s like: butter to bake in, a bun to transport the hamburger to my mouth and I miss the spoons of sugar that make my marinades sweet and sticky.
But the Dudey ingredient is definitely miss the most in my  DudeFood Kitchen is… ME BEER!!
Beer is the universal glue that combines almost every recipe made by and made for real men.
And right now I am at that point that a man’s gotta do, what a man’s gotta do! Cook with beer.
I respect camels, they are tough animals. They can work for eight days without drinking. That’s tough. Real dudes can drink for eight days without working. That’s also pretty tough.
Drinking for eight days in a row aside, I just want to cook up one recipe with beer right now.
A recipe with a nice blond Belgian Beer to add more flavour to a sauce or something. That is what my gut feeling is telling me.
Speaking of guts: You gotta have guts to cook up a recipe with a Belgian Blonde, when you have the Misses at home who is still on the prowl for Dudey ingredients in her Paleo inquisition.
The Misses… she who inspects the kitchen like a genuine ‘Whole 30 diet Torquemada’ and looks disapproving to me and every dish that doesn’t fit in the Paleo doctrine.
No matter if it’s only one ingredient that doesn’t meet the standard. Well, too bad then and she’ll have to eat this dish without the delicious sauce.
I can’t disappoint all those Dudes in the whole wide world who hunger for new Dude recipes, any longer.
Here you have a fantastic cod fillet with a paleoproof veggiebowl and a delicious sauce. A sauce with… ME BEER! 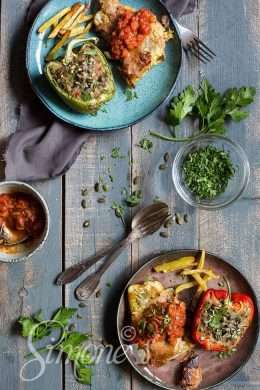 Cod wrapped in bacon with sauce of beer and tomato

For the bellpepper bowl:

« Previous PostMackerel salad with pomegranate and asparagus
Next Post » Strawberry cake and my 2nd blog birthday!

4 comments on “DudeFood Tuesday: Cod parcels with a beer and tomatosauce”