Hurray! The Whole 30 diet is finished, so the reign of diet terror has come to an end! It was hard nonetheless but I managed to keep to the diet almost every day.
On Mondays almost, on Tuesdays almost, on Wednesdays almost…
I have to be careful not to overplay my DudeFood hand already, because the Misses is still under the influence of the ‘Paleodiet virus’.
She is still experimenting with breakfasts like buckwheat porridge with raspberries. Gulp? Yuck! Anyway, we survived the diet regime and that’s enough reason to celebrate. And when you celebrate, you make cupcakes. But in this case, cupcakes the DudeFood way.
And at the same time making manly cupcakes is an occasion to put a bunch of other dudes in the spotlight. I am talking about the American Primal Dudes the BBQ Pit boys.
One by one these guys are as Mega Dude as they can get and they produce the most amazing and DudeProof worthy dishes from BBQ and firepit.
Them boys are specialized in (and constantly seeking to improve) slow grilling, chilling, beer drinking and thumbs up routine. And sometimes they multitask these disciplines all together!!
They make really great food and I think they are inspiration for every Dude or Dude to Be.
So as a tribute to these cowboy dudes I give you their recipe for bacon stuffed cupcakes .
Without trying to be blasphemous I don’t bake these cupcakes on the BBQ but in the oven instead.
That way you can also make these savoury celebration treats on a rainy day. 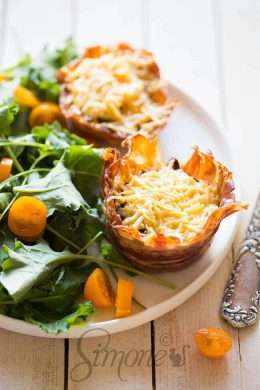 For the stuffing you make a filling of your choice. Examples can be:

« Previous PostWhat is a ‘whole30’?? And our results
Next Post » Dude Food Tuesday: Sliders threeways (mini hamburgers in delicious flavours)