How not to cook risotto – cookingclub (and steak tartare recipe)

Have you ever tasted a really bad risotto? One that is mushy, overcooked and just terrible? Well, I have to confess that we managed to make such a risotto in our cooking club last friday.. 🙂 Ofcourse I can also tell you that I did not personally cook this risotto and in fact a couple of us (including myself) were very sure that we should wait with the risotto… But that is just excuses right, since ultimately we were all responsible for the end result.

We had an interesting menu this time with the main being wild duck with garlic risotto and red wine sauce. The entire menu was:

Ofcourse the first item was immediately cause for discussion as goose liver is a controversial topic and a few people refuse to eat goose liver which is fine. I’m not a big fan of duck liver and/or goose liver but I did want to taste this cappuccino so I did eat it. I read this entire article the other day on goose liver and the fact that it can be sustainable and animal friendlier then it is currently produced but still… it remains a difficult one. I’m glad that a lot of the practices we have seen in the past have improved when it comes to animal cruelty and food production but there are still a couple out there, that really should be changed. In the end it is also for a large part down to the fact of what we are willing to eat and what we are not willing to eat. If no one buys it anymore, what’s the point of producing right?

Saskia, Mike, Tom. Winfried and myself were assigned to both the starter cappuccino as well as the main. The boys started on the starter while Saskia and I – for some reason – decided it would be a good thing to start to clean all the ducks… I had never used a wild duck before but there is a noticeable difference between a wild one and a tame duck. Usually when you buy duck breast it would be from a tame duck with a very thick fatlayer on the breast. Wild ducks don’t have such a layer unless it is shortly before winter.

I also thought the taste of the wild duck was much ‘gamier’ then the tame one.. I definitely prefer the taste of the tame one to the wild one, but then again it could have been our preparation that was wrong. I just didn’t like the entire dish one bit… Bleh… And it was sooooo much work! We cleaned the ducks, removed the breasts from the karkasses as well as the legs. Then we started braising the legs slowly in duckfat, and the karkasses went into the stockpot. In the meantime we had to cook whole garlic cloves in milk for about ten minutes and then transfer to the oven to slowly roast to become soft and tender to go into the risotto. We chopped and we cleaned and we did lots of stuff and ended up with a shitty dish… O

hahaha… Well we did learn a lot of stuff in the process but I was slightly disappointed by the outcome. The risotto had been on far too long. It takes only 20 minutes or so to make a risotto but we put it on before having the second course (of which I will give you the recipe below) and then it had to be kept warm in between meaning it was on the stove way too long. Then Winfried decided not cleaning the chanterelles was a good thing (…) so there was sand in them.. I didn’t like the taste of the duck and that was the end of our work.. 🙁

For me the real winners were the filet of beef (see recipe below) and the dessert which was delicious (even though the spices in the icecream got sort of left out..lol and the composition split so it had to be reheated to come together again (which worked by the way) but was still very delicious! I might share that recipe some other day cause this post is already becoming very long.

All in all, we had a great time, lots of laughs and well not all food was as good as we hoped but that is what we’re there to learn right? (that and to drink wine and have fun…) 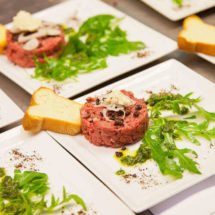