Recipe by ingredient » Chicken » Dudefood Tuesday: Noodles in a Caribbean way with chicken and pork

Dudefood Tuesday: Noodles in a Caribbean way with chicken and pork 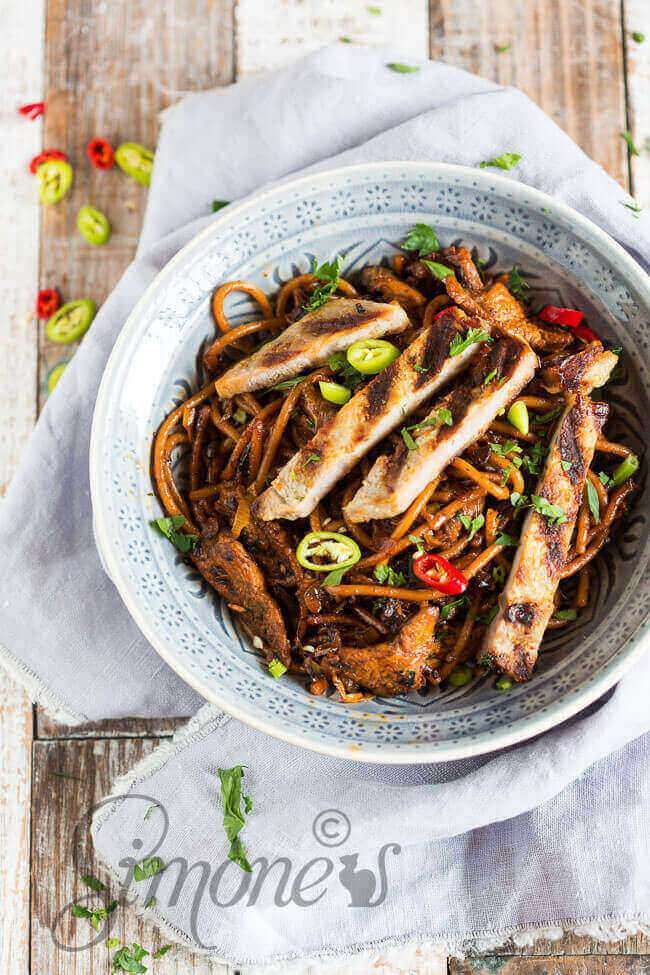 I’m sorry you had to do without me last week, fellow Dudonians. Unfortunately the Misses took reign over the DudeFood kitchen last week, again. And she even crowned herself with the title Dudette while making a Mac&Cheese with a little twist. She enjoyed it that much last week that she was in my kitchen again this morning proudly waving an apron. My apron.
My favorite apron of which I only have two left. The Misses was triumphantly telling me that she beat me this morning to the kitchen and I could ‘say toodles’ to cooking today and that she could do her multitasking thing again. And that multitasking was a thing which only women could and men not.
Though I hate to admit it, the Misses is right in this one. Nature has programmed man and woman differently. Were women multitask and perform several things at the same time with a mediocre result, men are programmed to do one thing at a time, but excellent. And frequently they perform several ‘one things at a time’ in rapid succession to get even better results.
It even has been researched and proven by prominent and well known scientists. The same scientists who spent years of research and had come to the conclusion that a very crowded elevator smells significantly different to a midget as to a person of regular size.
But let us get back to men and excelling at doing a lot of one things at a time in rapid succession.
I will give you an example that happened this same morning in my kitchen: 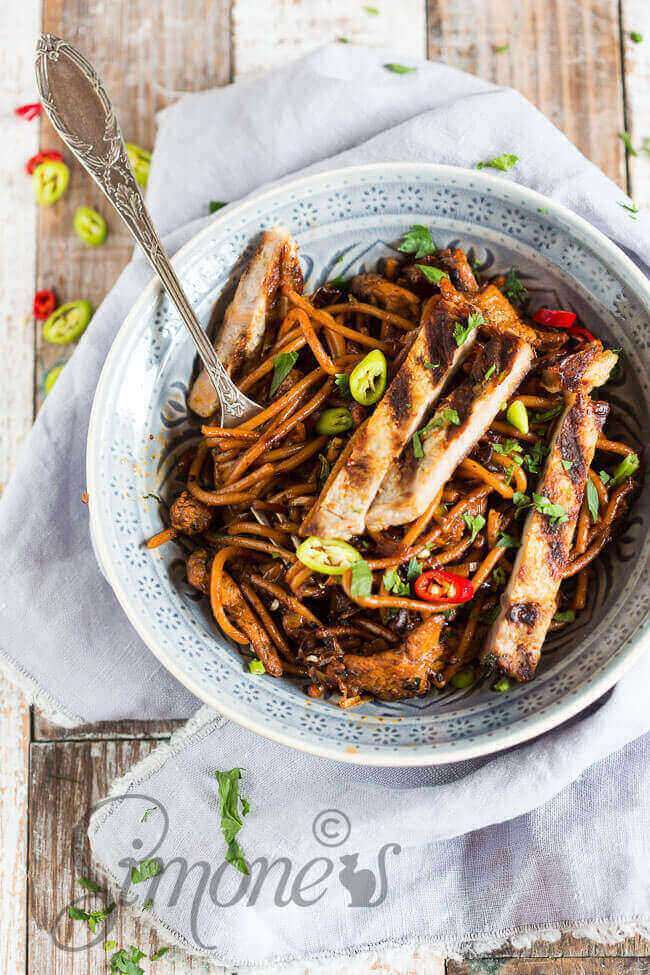 While the Misses was gloating and fiercely waving with my apron, I passed her and just opened the window in the kitchen very wide. With this first action I started a sequence of actions that would soon follow each other in a fast paced way.
She didn’t mind me opening the window, because she was too busy waving my favorite apron in front of me. I grabbed the other end of the apron and tugged briefly as to get my apron back.
The Misses responded by seriously tugging back and as I held on to the apron she started pulling more fiercely by the second, determined to win this tug of war contest.
And just when she pulled as hard as she could I did that thing that only men can do: a lot of one things at a time done perfectly.. in rapid succession.
I let go of the apron which made th Misses fly back and stumble right out the window that I’ve opened seconds before.
And while she was cursing and swearing in the garden I shut the window, opened the kitchendrawer, pulled out my second favorite apron and donned it and in a mere three seconds I had taken back control of the DudeFood Kitchen. That is how men do things.
With this example it is proven once more that multitasking is severly overrated. If you want results, you really shoul turn to rapid tasking with a little bit of vision.
To finish things up I pulled the curtain in the kitchen, so we wouldn’t be bothered anymore by a steaming, redheaded Misses that was stomping on the window. 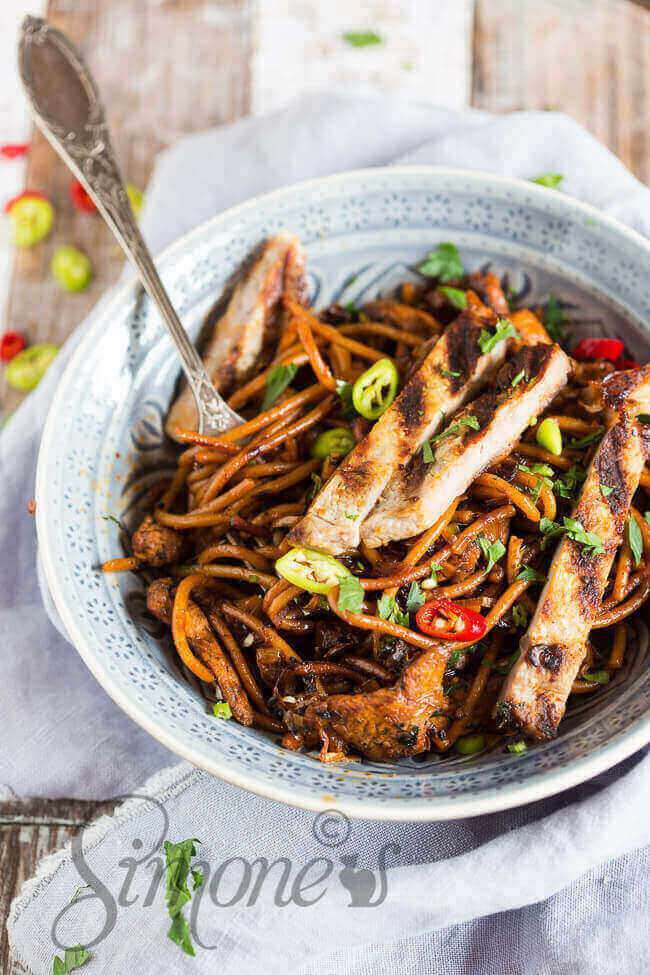 It was DudeFood time again, with Dudes!
And seriously: Mac&Cheese? That’s so hopelessly 2014. When you are a dude and you want to make something with pasta, it has to be full, rich and spicey. So today I give you stir fried noodles the way they make them in Surinam.
This Caribbean noodles are made with pasta, spaghetti to be precise, but also have a spicy note. And to make it even more Dudey I included two types of meat (who needs cheese when you can do with meat?)
Enjoy this easy to make and delicious stir fried noodles recipe. 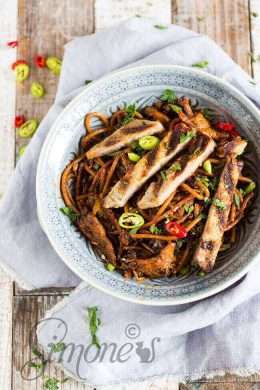 Delicously stir fried noodles in a caribbean way. With Chicken and Pork and a spicey tinge to finish it off.
Prep Time: 5 mins
Cook Time: 15 mins
Total Time: 20 mins
Servings: 3 -4

4 comments on “Dudefood Tuesday: Noodles in a Caribbean way with chicken and pork”