As I briefly mentioned yesterday I had a bit of an unusual sidedish to my carrotsoup. We had fennel on the schedule for Cooking Italy this week, a group led by our lovely Angela of Spinach Tiger, where we try and recreate some of the recipes of Marcella Hazan’s book the Essentials of Classic Italian Cooking. And I love fennel so I was really looking forward to this recipe..

However; as you may recall from the Crespelle ‘disaster’, my guy has an issue with cheese in his food and…you guessed it from the title; this lovely dish has cheese in it… Gorgeous fresh Parmesan, my favorite cheese! So while I bought the fennel bulb this week I hadn’t found a day where I could sneak it in. We’ve both been too busy and there was hardly any cooking done, but yesterday was my only day of this week and – as a bonus – Tom would not be eating at home! (don’t get me wrong…. I normally really like to have him home for dinner! lol… Just not for cheese nights!) But since my stomach was troubling me yesterday I wanted to eat something simple and healthy, so I made the carrot soup. And I made the fennel, since fennel – if you didn’t know this – is very good for your stomach! Maybe all the butter and cheese that goes in it, is not, but ok… you gotta compromise a little every now and then, right?

So I made the fennel; it’s really incredibly simple and it was easily the BEST fennel dish I have ever tasted! I could tell from the smell while it was cooking that it would be good, but the taste was even better then I had thought it would be. The recipe tells me that there should be no water left after the cooking period, but I still had some left, so I just lifted the fennel out of the pan and on to a little plate, added a little sprinkling of seasalt on top and a bit more Parmesan and just ate it like that.

And it was good! Seriously, very very good! Marcella has a version without the Parmesan but I actually think it was the Parmesan that made this so delicious. And… ahum… I actually dipped the little pieces in some grated Parmesan that I had by the side. I did tell you I am a cheese addict right? 🙂 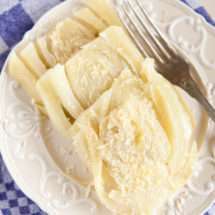