How to make arroz con leche

Arroz con leche is typically one of those dishes that you can find in a lot of different countries. This is my – delicious – version!

Yay!! We’re back in Holland (well, ok we’ve been back for a while now). Back from what has quickly become the number one on our list of least favorite holidays…

And because we hardly had any real proper Mexican food I thought it was about time I gave you a Mexican classis dessert. Well to be honest almost all countries seem to have a version of this delicious recipe somewhere. In Holland it is called ‘rijstepap’, in France it is ‘riz au lait’ and I am guessing there are many many more varieties.

The origin of arroz con leche is – I think – Spanish or Portugues but have a look on wikipedia for ricepudding and you’ll be amazed at the sheer volume of dishes. Crazy.  Tejberizs in Hungary, Tameloriz in Kosovo, Arroz con Leche in Mexico, Spain and Costa Rica and well the list is quite endless. But essentially all recipes are more or less equal.

At the Mexican bufet – of the two buffets we had in Mexico – there was always a rather tasteless version of arroz con leche. Too bad, because well made it is totally deliicous. That is my opinion anyway; it’s an old fashioned dish. Especially if you take a look at the eating of ricepudding than I do believe it is not very hip at the moment in the Netherlands. We used to eat a horrible ready made variant at home when I was a kid. Needless to say I was not a big fan of ricepudding until I made it myself!

My variation on the Mexican arroz con leche is with warming spices, which I love to use this time of year anway, so mostly cinnamon, cloves and star anis. Very very good with poached pears! But with regular fresh fruit this is also a quick and easy dessert.

And because I was recently treated to a beautiful package with products from a Dutch company that makes soy and almond milk, I used this for the arroz con leche.

I really thought adding these particular fluids really added something to the original. During the entire cooking time I had cinnamon and star anis in there to cook along with the rice and half way through I added dried cranberries.

The almond milk (unsweetened) gives it a nice almond flavor, making it a special kind of rice pudding really. I thought it was a winner and as usual when I make something it was way too much! But that’s ok as you can eat it warm for dessert or cold for breakfast (or warm for breakfast..lol)

For another delicious version made in the slowcooker check the coconut rice pudding with banana! 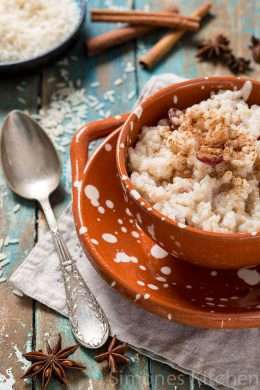