Amaranth salad with halloumi and pomegranate

A delicious amaranth salad with crunchy halloumi on top and some beautiful pomegranate as well.

Now be honest with me… have you heard of amaranth before? Or even better, have you tasted it before? I hadn’t. I had heard about it but it was some far ringing thing in terms of ‘o yes that sounds vaguely familiar’ but I had no idea how it looked, let alone know how it tasted. So when I saw it in the store I could simply not let the opportunity pass and bought a bag of amaranth.

It looks a little bit like quinoa except the grains are even finer and once cooked the amaranth is a lot stickier then quinoa. Taste wise I would say the two are pretty similar too. Both take really well to adapting different kinds of flavors and while I haven’t tried it in a sweet version I have been reading that it would work too.

Amaranth itself is a grain with a pretty interesting history. The Aztecs thought it had superpowers and even used it in their religious ceremonies, while the Spanish where so appalled by those same ceremonies that the grain was forbidden and fell of the radar for the next hundreds of years.

The Aztecs used to make shapes of their idols/Gods out of a mixture of ground amaranth, honey or human blood and then those were eaten during a religious ceremony… That’s maybe not what you want to do with your amaranth though.

Being naturally gluten free it is a grain that is slowly rising in popularity and is seen more often in health food stores or stores that have gluten free products. The amaranth can be ground and then used as a flour in baking or making pasta. It can be used as a type of popcorn too. In Peru they make beer out of it and it can be used in sweet dishes for breakfast or dessert too. So pretty versatile, again I would say, a lot like quinoa!

I made the amaranth this afternoon into a delicious amaranth salad. It was tasty for sure but if you do not like the texture of quinoa, you will most certainly not like the texture of amaranth. And while I liked it, I didn’t think it was that different from quinoa which I always have in the house. So unless I am convinced of that in the upcoming dishes I will create with this grain (it’s not really a grain by the way but more a seed) I think I’m gonna stick with the quinoa. But let me know if you have another opinion on amaranth or some great dishes I should try! 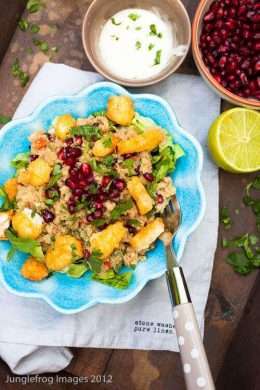 18 comments on “Amaranth salad with halloumi and pomegranate”