After having thoroughly investigated the club sandwich as we can get in most restaurants here, I have come to the conclusion that the best club sandwich is really the one you make at home. How to do that? I’ll give you the details below.

What do you think about when you hear ‘American cuisine’? You think about hamburgers, right? Come on, you can tell me… No need to be ashamed about that. I know it was the first thing that came to my mind but then again I didn’t want to immediately go the obvious route so I started searching on American recipes on google and was – quite frankly – amazed at the variety of dishes that popped up.

Most dishes are quite familiar, such as coleslaw, corndog, hotdog, corn soup or what to think of pumpkin soup or clam chowder? And then there are the lesser known dishes from the indigenous people of America, the Indians. I kept looking at dishes like bird brain stew or walrus flipper soup… Not what I really wanted to make although it sounded intriguing but finding walrus flippers or bird brains here seemed a little bit unlikely!

Pumpkin or no pumpkin

I then considered making something with pumpkin but I’m not a big fan of pumpkin soup and a lot of the other dishes I found were all combined origins such as pumpkin risotto and even though it is autumn I still felt it was early to be making pumpkin dishes. So back to the drawing board again and then all of a sudden it hit me; club sandwich !!

I’ve been doing a sort of club sandwich test over at another website for a while now. It involves me eating a lot of club sandwiches at different locations around Holland. Club sandwich might have its origin in the US, it has certainly been fully adopted by the Dutch. There are not a lot of cafe’s or eateries who do not have a club sandwich on the menu. They range from truly horrible to fantastic and anything in between. I started this ‘test’ out of fun really… I love a good sandwich and for years during our travels whenever I saw a club sandwich on a menu I just had to order one.

From Madagascar to Asia

Mostly out of curiosity, as I’ve had my share of really really bad sandwiches. Let me just say that a club sandwich in a shady little restaurant in Madagascar consists of VERY old and stale bread with two slices of dodgy ham, not to mention a equally terrible club sandwich somewhere in Asia with soggy bread (I prefer the old and stale!) and unidentifiable stuff in between. I didn’t eat that one as I wanted to enjoy the rest of my holiday but we did have a good laugh about the various club sandwich models around the world…

What makes a sandwich great?

So what IS a good club sandwich? I think that probably varies but for me it should have toasted crispy bread, bacon, lettuce, chicken or turkey, tomato, a good mayo and egg. There should be three sandwich slices which are usually cut into half or quarts and served with chips or French fries or I’ve even had them with tortilla chips. The club sandwich is said to have originated in New York as early as 1899.. (which does sound a lot earlier then 1900 don’t you think?)

And funny enough I came to the conclusion that while I must have had literally hundreds of club sandwiches around the world I had never made one myself. It seemed only fitting that for the Monthly Mingle of this month, hosted by my dear friend Jenn from Jenncuisine, I should choose to make a club sandwich. Not a very complicated recipe but my version of this American classic! I toasted the bread – obviously – and you can read in the recipe what I put on it. I did make my own mustard mayonnaise to go along with it which I think is part of the great flavor this sandwich had. If this sandwich would be in my test it would definitely be the winner so far!

While I used regular white bread for this club sandwich, I would actually prefer to use good sour dough bread, as that really enhances the taste of the sandwich. The egg can be fried or cooked, whichever you prefer. 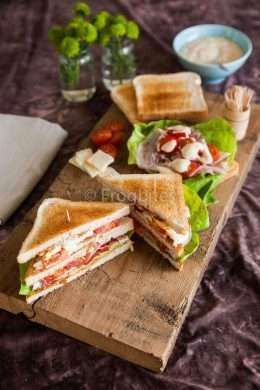 The ultimate club sandwich can vary in contents but for me it's all about the bread and the fillings
Prep Time: 10 mins
Cook Time: 5 mins
Total Time: 15 mins
Servings: 2 people