The ultimate gado gado recipe plus a killer peanut sauce

Did you know I am the master of doing useless stuff? Well, now you do. I have just spend most of the afternoon checking out new website templates for my site. Simone’s Kitchen is a custom design and while I do like it, the problem with anything ‘custom’ is that it is hard to change something yourself. That usually ends up going badly wrong. And so everyone once in a while I get the irresistable urge to check out new templates. One that I can configure myself and mess up myself. And the end conclusion is always that it is just not exactly what I am looking for and it doesn’t do exactly what I want it to do. Or I lack the right amount of programming knowledge required to make the changes. End of story.

And so half a day goes by – or a whole day for that matter  – and I have done nothing. Put five templates on my testsite (thank god I have a test site!) and took them away again. As in waste of time!

Well, I learned another thing today. But enough about blogs and templates and all that boring stuff. Time to talk about this ridiculously delicious gado gado. With thanks to Esmée as I was looking for the ultimate peanut sauce recipe for a while now. You maybe think that it can’t be that hard, but I am definitely not talking about anything from a jar or can. And a homemade peanut sauce requires some love and attention. It’s a little bit work but trust you, you will never look back!

Gado gado itself is a really simple dish; it is essentially cooked vegetables that you serve cold with a boiled egg and obviously a really good peanut sauce. Because that is what makes the dish. Or breaks it if it is a lousy one.

For years I have been under the assumption that gado gado and atjar tjampoer were the same thing… Don’t ask me why…. 🙂 So imagine my surprise when I was served my very first gado gado. I wasn’t immediately sold as the first one, was definitely not the best one. But once I got a real delicious version served in indonesia I was hooked. And of course had to try it for myself!

So here it is; the ultimate gado gado with a killer peanut sauce! 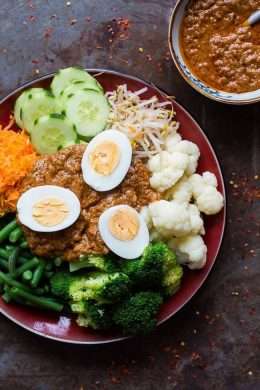 The ultimate gado gado recipe plus a killer peanut sauce