Styling in the remake – Quinoa salad 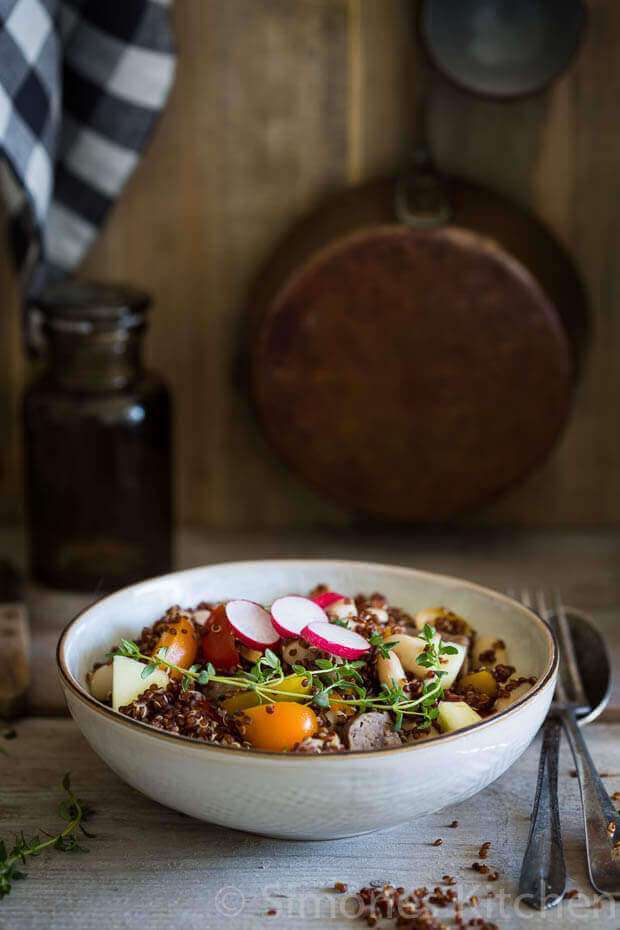 I’ve had it for a while now… That nagging feeling when it comes to my styling skills… I’m not a stylist by any means and while it would be lovely to have my food styled by either Alexandra or Caroline every day, in real life that is just not an option and I have to do it mysef ofcourse.

And I learned quite a bit over the years. Mostly by doing it a lot and by looking at the work of people I admire such as Meeta or Peter of Souvlaki voor de soul. Totally different in style from me but you can learn lot from someone elses work by looking at it and not necessarily by copying their style. That is not what this is about. But looking at other people’s work you get a sense of how they play with props, placement of cutlery, texture of backgrounds and such. 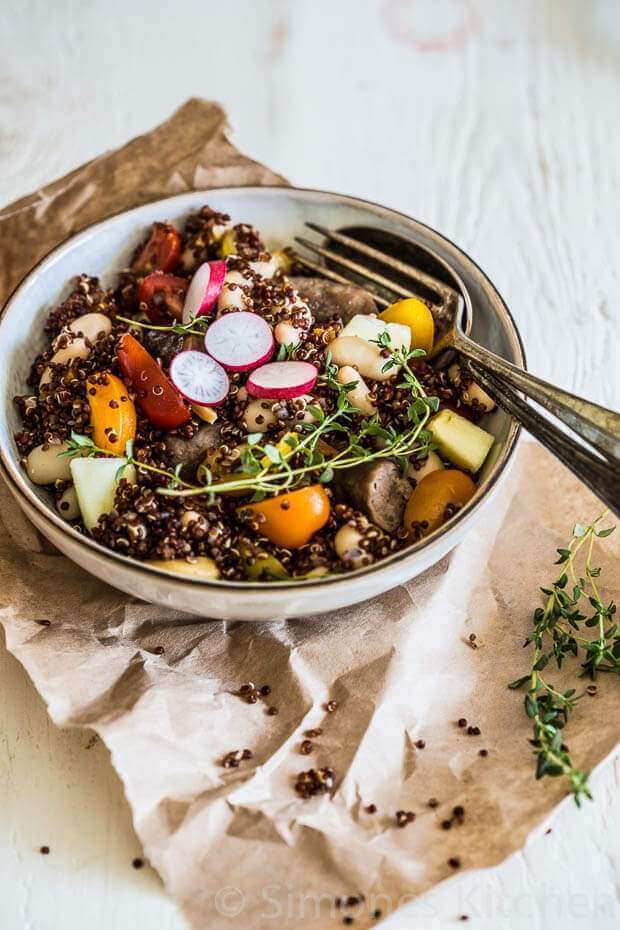 But lately I feel like I’m just repeating the same trick over and over. It is therefore time for a change, something new. A change in style or at least a variation. And that is not so simple really. So it seemed a fun experiment to make 1 dish and style it in two different ways. Once in my usual way and one completely different. For the other style I got inspired while browsing through the most recent edition of Donna Hay magazine. And no I am not talking about the clean style she is know and loved for, because Donna has more sides too. And you can clearly see that in the magazine more than in the books. Which makes sense as that is not only worked on by miss Donna but by an entire team with stylists and photographers. So Donna it is. 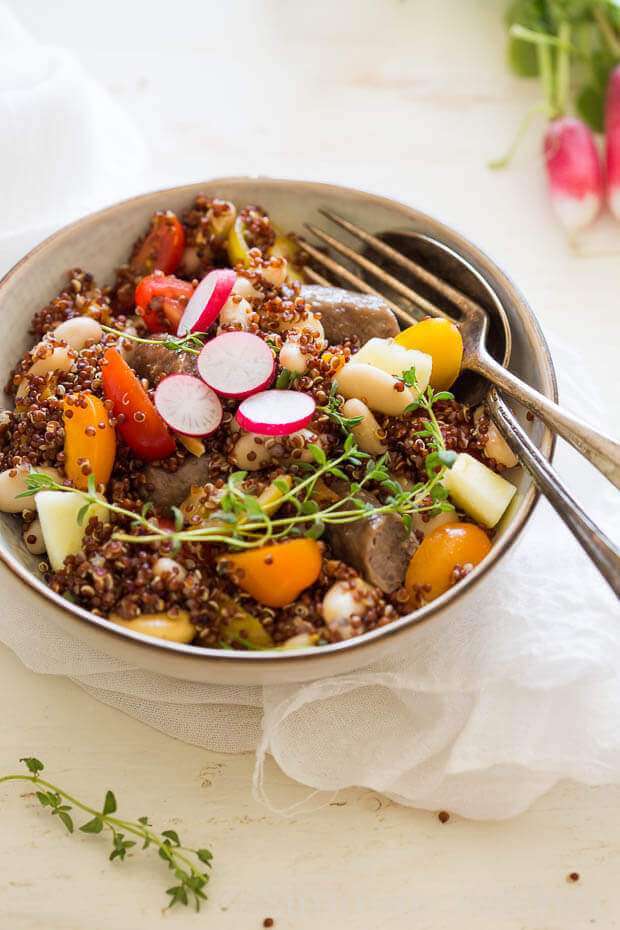 The photo you see above is kind of my ‘standard’ style. Not too much fuss, light and bright, salad, some cutlery and done. Nothing wrong with that but I wanted something else. I think part of the problem is that I don’t take enough time to think about it. And the fact that I did think about it this time already made a difference.

And while we’re at it; below you can see what the salad looked like before styling it. I always take the various components with me into the studio or whereever it is I am taking the photo. The dressing for the salad is a mustard dressing (in the red bowl) and you don’t want to go and stir it all through straight away because it will not look very charming. The cashews are already in the salad but I brought some extra in case I wanted to use them as decoration (I didn’t except for snacking on it) and the thyme is for decoration. In the blue bowl are the pieces of apple that are still to be added to the salad. 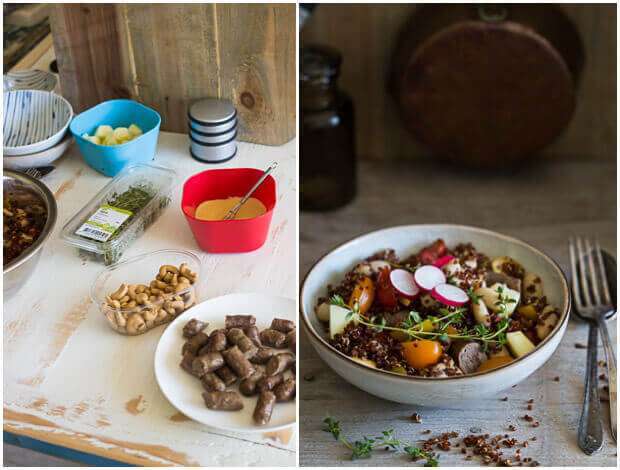 The photos in Donna’s Magazine all had a bit of a kitchen feel with things in the background that told a story so I tried to replicate that feeling a bit. Did I succeed entirely? It’s ok but I kind of feel it is lacking something. Regardless of looks, the salad itself was delicious. I had seen a salad like this in the Green Kitchen book and I changed it a bit around to suit my needs and wishes. 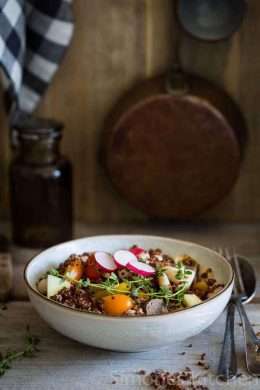 And for easy comparison I have the two styles side by side below! Let me know your thoughts! 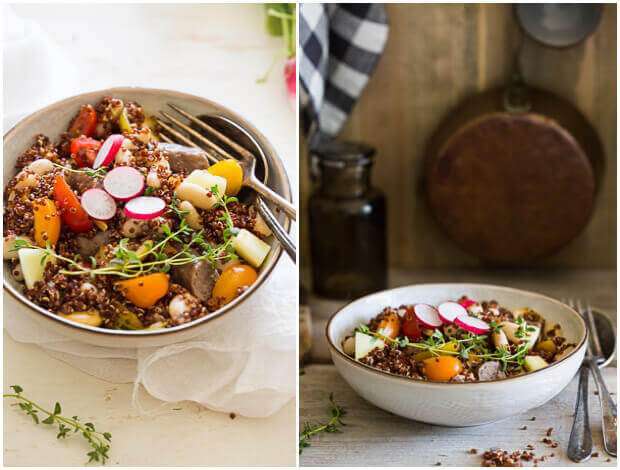 26 comments on “Styling in the remake – Quinoa salad”