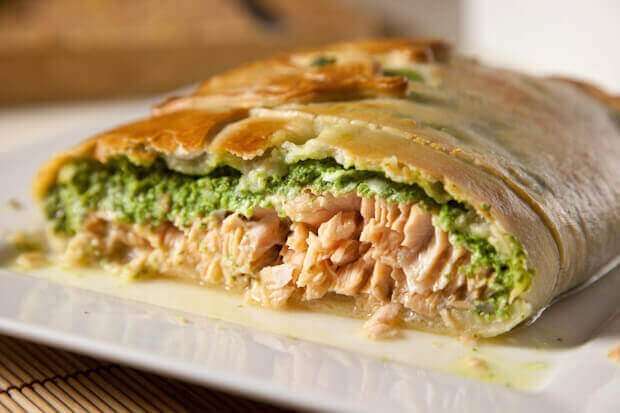 When you receive an email from Ivonne and Lis asking if you would like to host the Daring Cooks for december, you just don’t say no! So I happily said yes and I thought it was an honour to be even asked, but as soon as the email was send; panick set in! O noooo, what can I possibly come up with that would be worthy of a daring cook challenge?? After discussing with a foodie friend who had some good suggestions I was left with the option to either do a salmon en croute or to do a ham glazed in honey. Now while the latter is certainly on my to-do list (in fact; I am thinking of making it for christmas dinner) I thought it would be more difficult to come up with a vegetarian solution or a fish version then picking the salmon en croute, which would be easily converted in either vegetarian (veggie wellington) of meat (beef wellington).

Ofcourse I had to test the recipe myself first as I needed to know if I could pull it off and to take a few photos to post on the forum so people would be tempted to make this dish. I have to be honest; I struggled with making the dough. I had seen a really simple video on Good Food, but for whatever reason it simply did not work. It was too crumbly to make any decent dough out of it, so I opted for buying it instead. Here in Holland it is – however – not easy to buy shortcrust pastry in the supermarkets so I ended up using the dough that they sell for making quiche, which I think is not the same (it is not is it?) and that was too dry for this dish. 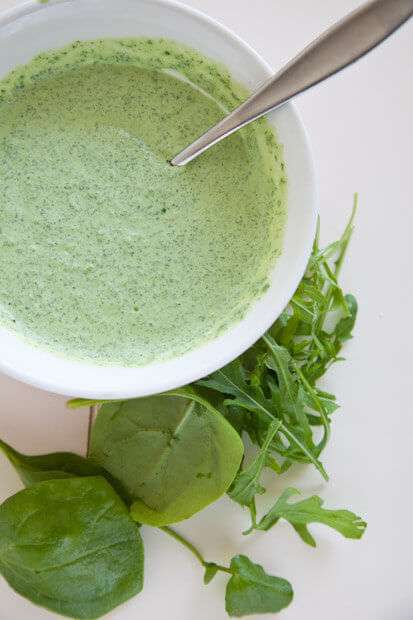 I recreated it again a couple of days ago and this time with puff pastry. For some reason the pastry became slightly soggy this time, but overall the taste of the pastry was better then the first time I made it.

Making the sauce was a breeze and it is a lovely sauce. I could not find watercress as is stated in the recipe so I used Lamb’s lettuce instead and love it! This is actually a very versatile sauce which I think can be used very successfully on many different dishes. A few people complained that the taste was bitter. I am not sure if that might have been caused by the watercress but if you want you can substitute the watercress for lamb’s lettuce, which is what I did the second time around. It does require some good seasoning as it would be bland without.

The pastry I bought the first time is actually sold in prepacked sheets of about 15 x 15 cm each so that made it a little hard to make one layer of dough, so if you are wondering why my salmon looks a bit like a patchwork, then that is the reason.. 🙂

Overall I think this was a pretty straightforward and relatively easy challenge, if you don’t count my pastry issues (which, ok let’s face it; was what this was all about!) I am determined to get this right at some point, so expect to see more of this dish in various versions until I get it right. The salmon itself is lovely and moist and if you do not have pastry issues will be a real winner for christmas dinner. Since I haven’t really nailed the recipe myself I am planning of tackling the honey glazed ham for christmas, which will be tested very soon! Christmas menu testing is up next (I love christmas menu testing, don’t you? What better excuse to make wonderful dishes that you wouldn’t really make during a regular weekday normally!

And for those who want to try out the salmon en croute here is the recipe!! Good luck and let me know what you thought of it. I can safely say that a lot of Daring Cooks did much much better then I did!!! Have seen some gorgeous results already! 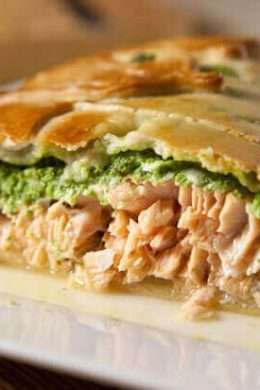 The dough was not very successful in my case but I think with the right ingredients and instructions this dish is a winner! 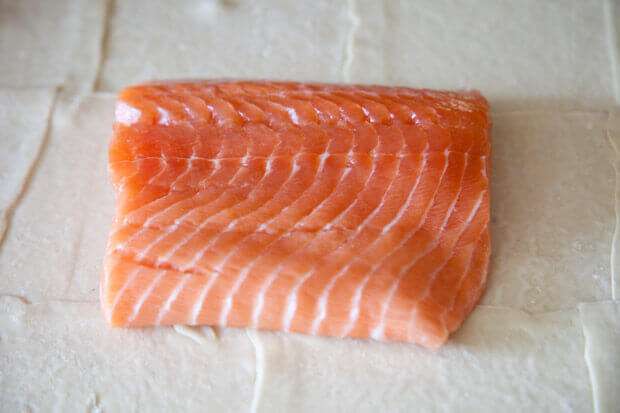 Shortcrust pastry
While this is not mandatory to do, I highly recommend making your own shortcrust pastry as it is very simple to do! As mentioned in the notes; please make sure to not add too much water as that is the key to having a successful shortcrust pastry. Watch this video to check the correct consistency of the dough Making shortcrust pastry

Instructions:
1. To make the crepes, whizz the flour, egg and milk with a pinch of salt in a blender or processor until smooth. Pour into a jug and stir in the herbs and some seasoning. Leave to rest.
2. Fry the mushrooms in a little oil until they give up all their moisture and it has evaporated, leaving you with a thick paste. Add the thyme leaves and some seasoning and keep cooking for a few minutes. Cool.
3. Stir the melted butter into the crepe batter, heat a 15 cm crepe pan and oil it lightly. Pour in enough batter to make a thin layer on the base of the pan, cook until the top surface sets and then turn over and cook briefly. Remove and repeat with the rest of the batter. This will make a couple more than you need so choose the thinnest ones for the recipe.
4. Sear the beef all over in a little oil in a very hot pan. Brush with the mustard, season and allow to cool.
5. Lay a large sheet of cling-film on a kitchen surface and put two crepes down on it, overlapping a little. Lay over the parmaham (prosciutto). Spread the mushroom mixture over the ham and put the beef in the centre. Roll the cling-film up, taking the crepe with it, to wrap the beef completely into a nice neat log. Chill for 1 hour.
6. Heat the oven to 200°C/390F. Roll out the pastry, remove the clingfilm and wrap the beef in the pastry like a parcel, with the ends tucked under. Trim to keep it nice and neat. Brush with egg, score with shallow lines across the top and chill for 20 minutes.
7. Cook for 20 minutes. The best way to test if the meat is done to your liking is to neatly and carefully stick a skewer into the beef, count to three and then test it against your inner wrist. If it is cold, the beef will be raw, if it is warm then the beef will be rare and if it’s hot, it’ll be cooked through. Leave to rest for 20 minutes before carving. 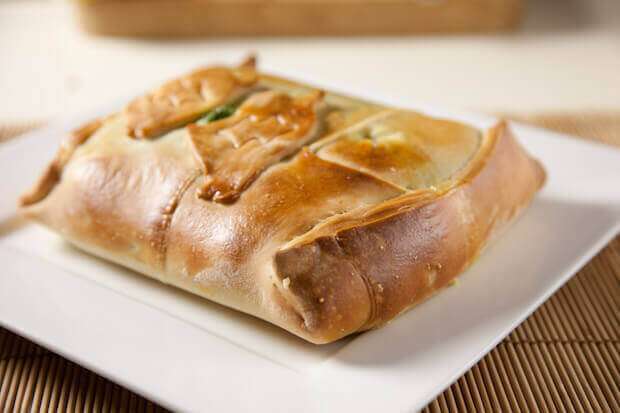