I was first pointed to the book from Anjum Anand by Soma from the fabulous blog ECurry. If you haven’t checked out her blog you should. It has loads of Indian recipes and beautiful photos too. Anyway Soma gave a review of the new book by Anjum and I just had to get that book for myself and so I did. It finally arrived this week and I couldn’t resist making one of the recipes straight away. There are loads of delicious recipes in the book so it was hard to pick but I didn’t want to make life too difficult for myself so I started with something that felt fairly simple to me. A punjabi chicken curry. I love curries and I love Indian. Usually the food we get served here in the Netherlands is toned down a bit on the spices as our weak stomachs are not used to the hot flavors in a true Indian dish but as Tom and I really do like spicy food, I think over the years we have become a bit more used to it. Making the dish was fairly straightforward and easy. I used chickenlegs (the larger ones) instead of chickenfilet as I think that really does enhance the flavor a lot. Ever since I used those for making chicken satay last week I am convinced it is worth the extra effort of cleaning the bones! So much more taste and the meat stays lovely and succulent as opposed to dry. I can highly recommend doing that.

So what did we think of the dish? The taste was good. Spicy but not too spicy and it all went in really well, but…. I know what I did wrong and it’s just stupied that I didn’t think about it before. I used old spices… Indian spices such as ground coriander, ginger, cumin and garam masala are not spices we use a lot, so the stock I had was apparently not good anymore. I didn’t think about checking it before I started cooking and while eating both Tom and I felt it was lacking a bit of… well a bit of punge. And that’s when I started thinking it could have been the spices I used. So I checked them afterwards and tasted them and indeed, that was the issue… No flavor left in those spices!! I threw them out straight away!

I will have to make this dish again (or maybe one of the other curries in the book) with the proper spices as I am convinced that will mean a world of difference in terms of flavor. Good dish that can be much better. We still did enjoy it quite a lot! 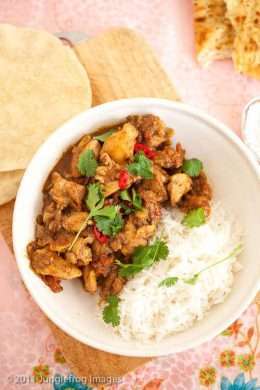 Delicious and fragrant. If you love Indian food this is a winner. But be sure to check that your spices are still good before starting out!
Servings: 6