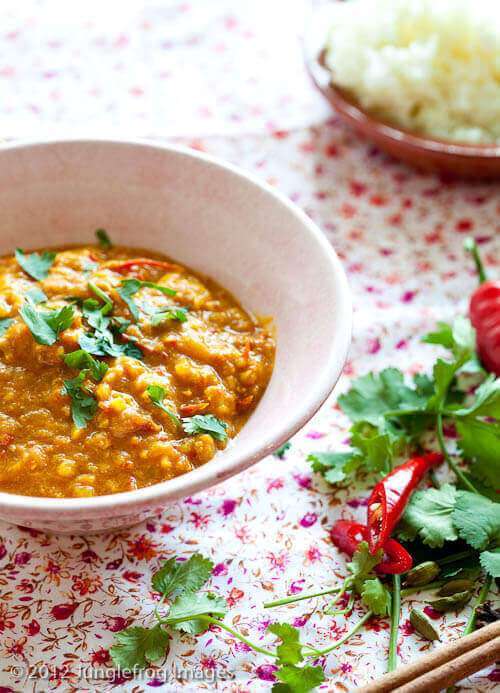 The very first time I had good Indian must have been in the UK. I was visiting friends at the time and we went to an Indian restaurant which just blew me away. I can’t even remember what we had, as we also shared most of the dishes but all of it was absolutely awesome and totally delicious. Since then I was hooked. Hooked on Indian food! Now obviously the Indian food we get here in European is I think slightly adapted to the Western palette, a little less spicy but still quite tasty overall. However when I finally went to India it was another experience all together! 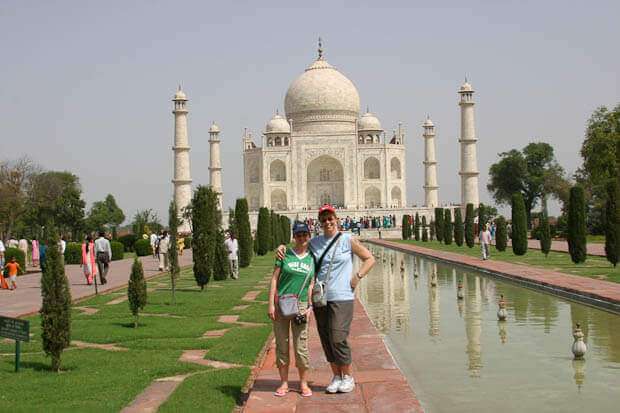 Sarah and me in front of the Taj Mahal

I no longer work for Nike so I can now tell you that that ‘business’ trip we took 8 years ago was all about fun and just a tiny bit about work… 🙂 I was Operations Manager at the time of the professional sports department. We took care of the entire logistics surrounding events like Olympics, Tour de France, World Cup Rugby and other fun events like that, so you can imagine that getting the clothes delivered to the athletes on time was crucial. We were used to working under tight deadlines and I was heading the department of 5. Mostly, we had a lot of fun, although we did work our buts off and certainly did not have a 9 to 5 job (more 8 to 8 most days!). I did travel quite a bit for work at the time too but in most cases 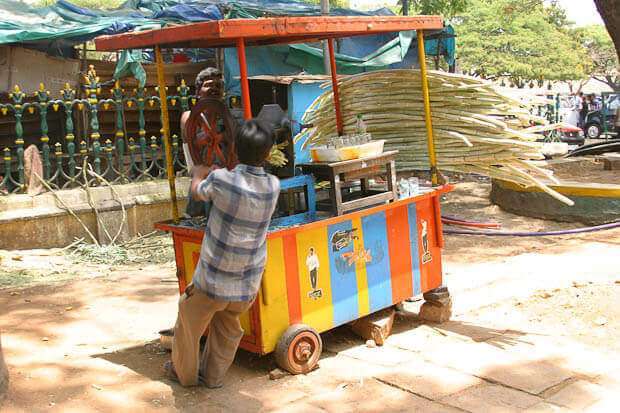 that was flying in, working late and flying back, so no space for fun. But Sarah and I, we came up with this brilliant plan of telling the Asian factories a bit more about ‘promo’. You see the trouble we always ran into was that factories, used to producing large quantities for retail, where not always very keen on producing 10 units for a track & field athlete, so we needed to educate them a little or so we managed to convince my manager… 😉

I think in a way, she must have known that this was not a very hard trip to take and that we would have some fun in between but I also think she didn’t really mind. We had worked ridiculously hard the entire year so we earned it! We would be 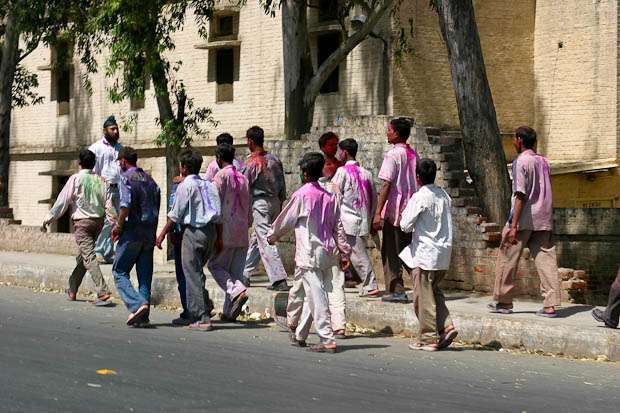 going for two weeks and visit three countries; Thailand, India and Sri Lanka. It was quite a bit of work scheduling it all, as we did have to visit the liaison offices in those countries, we would have to give them presentations (my biggest nightmare !) plus a few factory visits would have to be scheduled too. I think we were leaving around Easter, so we went a few days early to be able to visit the Taj Mahal and see some of India.

What we did not know before leaving, was that it was the Holi festival. A festival that – according to the Lonely Planet – is one of the few were you are not encouraged to go outside as a foreign female. So that was a bit of a bummer as it took an entire day out of our schedule. I understood later from Soma, that this is a festival we should have celebrated in an Indian home. On the streets of Delhi it was mostly drunk groups of men that were roaming around. 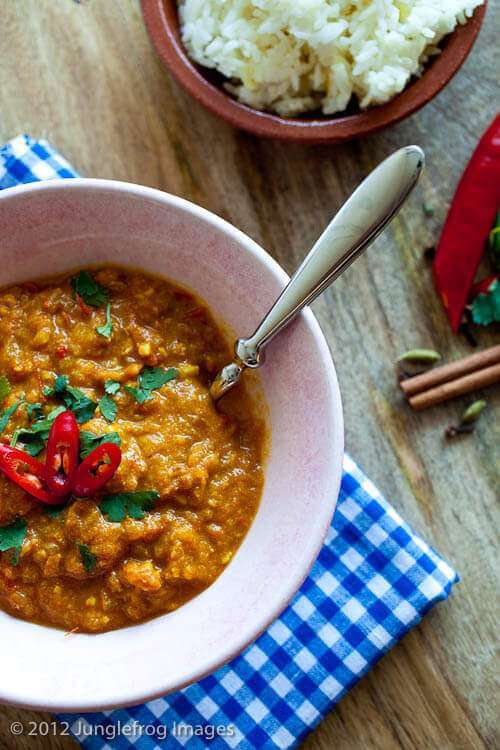 We did get to see the Taj Mahal and I loved that!! I thought I would not be as impressed as I actually was. I had seen so many images before going that I didn’t think it would be able to live up to the tale but it actually did. You have to see it with your own eyes to know what I’m talking about. Definitely a must see when in India.

But now the food…. We were lucky that we were mostly in the company of our Indian colleagues. That makes it a lot easier to make decisions on what to eat and what not. They took us to a typical small breakfast place, we had a fancy lunch at a posh restaurant and a dinner at a not so posh restaurant. In all cases, I totally loved the Indian flavors. Yes, some of it was so spicy I had steam coming out of my ears but for me Indian food is all about the combination of spices and flavors, which I think is unique to this cuisine. I wasn’t as much into food then as I am now, which is unfortunate, as I would love to go back and do it in a totally different way. I’m still trying to convince Tom that we have to visit India, but for some reason he is very hesitant to go. 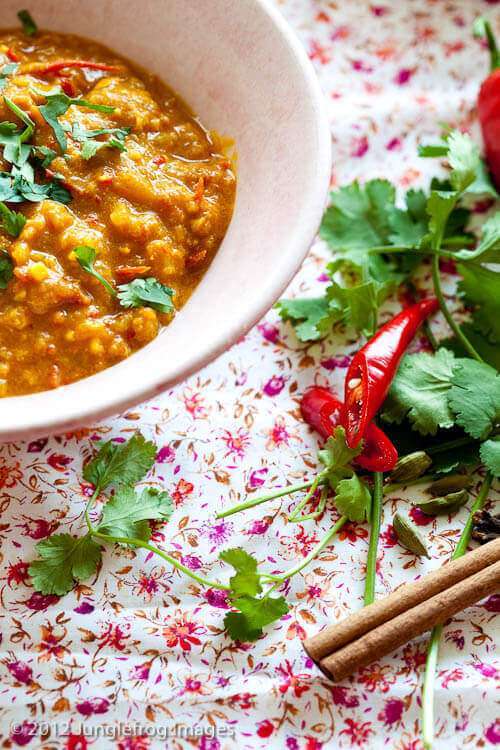 It’s a country of extremes I think and he fears he is not able to cope very well with the masses of people everywhere. I’ve only been in India for 5 days but in those 5 days I fell in love with the country, the culture, the food and the people. So we WILL go back at some point in the – hopefully – near future.

In any case, since then I have been trying to recreate the Indian flavors at home, but that is a whole different story altogether! Not so easy as it sounds too… Your spices or rather the quality of your spices, can make or break an Indian dish and sadly, good spices are not everywhere to be found as I soon found out when I had a very disappointing curry before. I now buy my spices in bulk and not ground but whole. I keep them locked away in a dark place and if I need some they are now fresh as they keep for a very long time. So whatever you do, make sure you’re spices still have some punch in them. 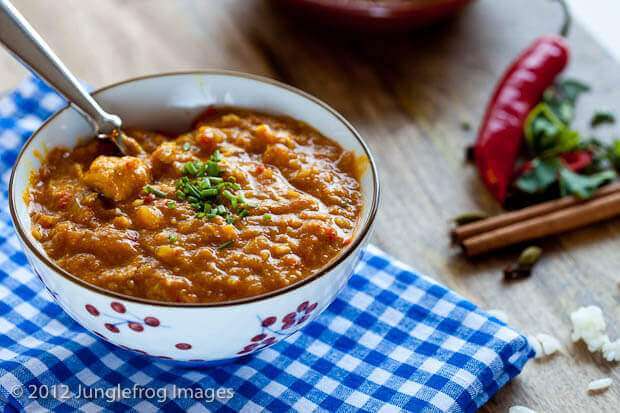 I now realize this has become a VERY long post for which I apologize..;) And I started out thinking; o, I have nothing to write about! lol… This delicious recipe is once again from my Indian guru, Soma from the gorgeous blog Ecurry. I was just looking back through my blog and notice I have made quite a few of her recipes. This one is delicious and I think the first chicken curry I made at home that actually tastes like Indian food, so mission accomplised!! It’s a simple one too, let’s call it curry for beginners…

P.S. These photos are taken with the leftovers; if you are wondering what happened to the chicken. Most of that was devoured already! 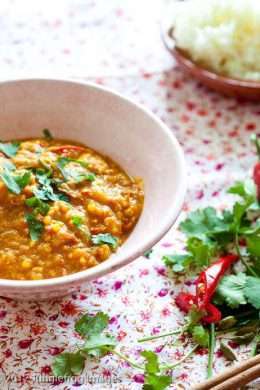 One comment on “Chicken curry and an Indian travel story”