Pickling your own veggies – Donna Hay #15

Here’s another example of a simple job in the kitchen that I thought would take forever. Or maybe not forever but at least a few days and certainly not the twenty minutes (well ok a little more than that) that it took for these delicious veggies to be ready. It’s another Donna Hay recipe for my Donna Hay challenge and this time she decided that I should pickle my own vegetables to eventually eat those on a bun. Yes really… Now you probably think; what a lot of nonsense for just a bit of something on a sandwich but trust me, it is so worth it! And very simple to make.

And this is the sandwich to be…

This should really be a sandwich with burrata. Burrata is an Italian cheese that is made from mozzarella and cream and is – apparently – available in delicatesse shops and cheese mongers. I’ve never eaten it but somehow I keep seeing recipes with it passing by lately so I kind of feel I need to put some effort into finding it!. Whatever the case; I used buffalo mozzarella as an alternative and that was also very tasty. The creaminess of the cheese with the sweet and sourness of the pickled vegetables was a perfect combination. Thanks to Donna! 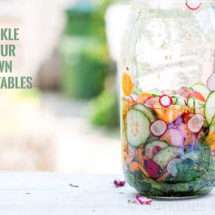 « Previous PostLettuce and cucumber salad – Donna Hay #13
Next Post » Out of the office!