My last failed attempt at making macarons has been a while ago and was for the Daring Bakers in october. So when Jamie and Deeba started their MacAttack I could not stay behind! My goal, obviously, to finally produce a decent batch of macarons. One that I would be able to serve to other people then Tom without them bursting in laughing asking me what I was thinking… 🙂 And today, ladies and gentlemen, it seems that I finally had a 100% perfect batch! As usual I started with aging the eggwhites which I put out yesterday, then whipped them into a meringue today per the usual instructions (see below) and I did make a mistake there as I actually put the lavender sugar into the eggwhites together with the rest of the sugar, making it maybe a tad too sweet, but ok, minor detail… 🙂

Then the crucial part came and the part where I think have gone wrong in the past and that is in achieving the correct texture for the macronage (I think it is called that way…!) I do tend to overbeat the mixture resulting in the dough being too soft. Proof of that is actually the fact that whenever I used to make round on the baking sheet they would always spread quite a lot and sometimes merging into one another. This time however I decided to count. It is stated everywhere that you should not fold the mixture more then 50 times. So I carefully folded and folded and counted and counted, coming to a total of 41 turns where I thought the mixture was still a bit too thick. So I stopped. That might sound weird but the last time I thought the mixture was too thick, folded it a couple of times more and the damage was already done! So not this time! All the powdery stuff was mixed into the meringue and the mixture was quite thick but flowing. And I am happy I stopped there or I am sure I would have over beaten it again. It now actually had the perfect consistency and even when making the little rounds on the trays I felt that it already worked so much better then the previous times. The rounds flattened a little bit but not outside of proportions as they normally do and there were no peaks left on top. I even made a few that were too small as I was so used to them flattening out so much more then they did!

I almost could not resist standing in front of the oven the entire time watching if they would develop feet, but I resisted the urge and went upstairs to work a bit more only to come back to perfect little feet! I checked if they were baked enough after 25 minutes but they weren’t (I always very carefully try to lift one from the tray and if they lose the bottom when I do that I have to keep them in a little longer so I can get them of the baking sheets) so I left them in for another 5 to 10 minutes. By then they were perfect to get of the trays too and not one of them broke! I had a reasonably successful batch a few months ago but even then most of the macarons broke when I wanted to take them off, so having none break was a first! I almost wanted them to break so I could pop one in my mouth to taste… Luckily I was left with an uneven number so ofcourse I had to eat the uneven one.. 🙂

Delicate and crunchy on the outside and chewy on the inside. I still can’t believe I finally managed, so sorry if I keep blabbing about it!

I made a buttercream as per the instructions of Tartelette’s recipe and I made it in two variations; one with vanilla and one with lavender sugar. I liked the vanilla better, but both of them are really good!

Now I did promise someone to save a few if they were good for tomorrow but… not sure if they survive that long! 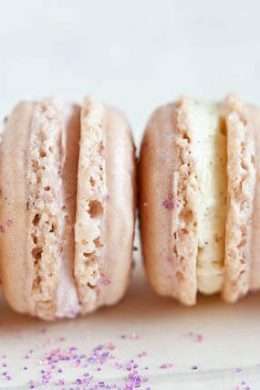 « Previous PostPasta amatriciana; Cooking Italy and a give away!!
Next Post » Which camera?