I think I can safely say that we had the darkest workshop every just yesterday. And it wasn’t even the workshop on artificial light… But it could have easily been. In the – normally rather light – workshop space from Greendelicious it looked like night had set in. That’s what you call ‘raining cats and dogs’ I guess. And still the participants managed to put up some great images despite the lack of light… Tripod would have to be the magical word here. Without it, it was simply not possible to take a decent shot. The first workshop on articicial lighting was also last week in Almere. Everyone was enthusiastic and I am pretty sure that Ikea had a doubled income this weekend.. And in the light of ‘practice what you preach’ it was time for myself to get out those tiny and cheap Ikea lights.

Charlotte and I had a cooking session but by the time we were done with cooking it was around 7.30 pm and as dark as night. So I grabbed two Ikea lights from upstairs and voila; managed to make a decent picture of my delicious little pie.

The recipe is originally from Donna Hay but is adapted by Charlotte and myself since it was originally a rhubarb pie. Not really the right season for rhubarb, but if you’re reading this in spring, you might as well go for it. I bet it’s delicious with rhubarb too. Rhubarb is quite acidic so I figured it might be good to replace with cranberries who are also quite acidic. Plus they always do great on any christmas table to if you’re looking for a simple and delicious christmas dessert this might just be it. It’s on the heavy side though so make sure you don’t have a ten course meal in front of this or you’ll be entirely stuffed.

Serve it with a nice bit of vanilla sauce or a good bit of whipping cream. 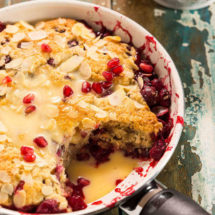