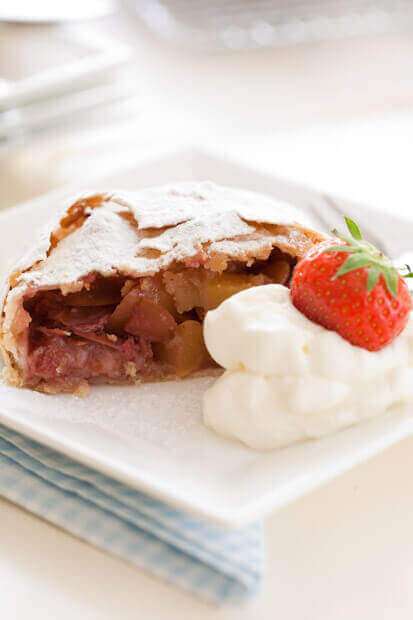 I think one the best thing about being part of the Daring Bakers is that you are “forced” to make things, you wouldn’t otherwise attempt. My first challenge last month was the cheesecake, which I had never done before and the second challenge for me was Apple strudel. Ofcourse I had tasted Applestrudel many many times before, but never in any kind of homemade variety, so I wasn’t really sure what to expect. The one mandatory thing we had this month was to make sure that we made the dough ourself, anything else was left up to the imagination by the host of this month; Linda of Make life sweeter and Courtney of Coco Cooks.

The May Daring Bakers’ challenge was hosted by Linda of make life sweeter! and Courtney of Coco Cooks. They chose Apple Strudel from the recipe book Kaffeehaus: Exquisite Desserts from the Classic Cafés of Vienna, Budapest and Prague by Rick Rodgers.

Making the dough was actually pretty straightforward. I don’t have a standmixer so I simply followed Linda’s advice to mix the ingredients with a wooden spoon and then continue the kneading by hand. I rested the dough for about an hour and some, while in the meantime I prepared my fillings.

I had decided I was going to make two versions of the one batch of dough. One would be the traditional apple strudel and the second would be a filling of my own choosing. I wanted to pick fruit as we would be using the strudel for dessert, so a savoury option wasn’t something I wanted for this time. I decided to use a filling of mango, strawberries, roasted almonds and a few tiny bits of marzipan thrown in. I was a bit worried about the wetness of the strawberries and if that would work out, but I decided to try it anyway. You don’t know if it’s gonna work untill you try it right?

Once the dough was really to be rolled out (and pulled out further) I split it into two equal parts and rolled it out on a dishtowel which I figured would be large enough for my half portion and it was. I think I rolled it out properly as you can actually see the teatowel underneath shining through the dough and it was rather thin, with a few holes here and there, but that wasn’t a problem, I was told… 🙂

I had prepared the filling not really measuring much, so when it came to put the filling on top of the dough it turned out I had made far too much. I did – sort of – half the ingredients or so I thought, but apparently not well enough. But since the filling itself was very edible that was no issue at all. The rolling by picking up the towel also went very smoothly, although I was worried I didn’t have enough dough since it was only half a roll and the photos I had seen sofar of the doughrolls looked huge. But I was left with two neat packages; one containing the apple mixture and the other the strawberry mixture.

I popped them in the hot oven and when I took a quick peek about 15 minutes later I found that the strawberry was leaking massive amounts of fluid… what I had feared seemed to be happening. I decided to leave it and see what would happen.

I left it longer then the 30 minutes and they were still quite pale, but that is probably due to my oven not being the best anymore and in need of replacement (the temperatures can fluctuate too much and even though I use a special oventhermometer; it’s no garantee!

I think all together I left it for about 45 minutes before taking it out. It was still pale but since I was gonna dust it with icing sugar that wouldn’t be visible anymore anyway.

We waiting for half an hour before cutting the strudel and then we got to the tasting part!! (well, after taking the photos ofcourse.. :)) The apple strudel was lovely and tasted exactly like any regular apple strudel, but I felt the strawberry had lost too much of it’s precious fluids and thereby also much of it’s flavour. While still very tasty it is apparently not the best fruit to put in an applestrudel, or maybe I should have added more moisture soaking things. I did put in the raisins and the breadcrumbs, but evidently not enough. If anyone has any tips on what to do if baking strawberries?

Overall I loved making this dough and it was really easy. I can see myself definitely using this in future, but I’m more inclined to use it for savoury goodness. Not because I didn’t like the taste of the sweet versions, but simply because there are sooo many other sweet things that I like better then Apple Strudel… 🙂

For those of you who want to try and recreate the dish; here is the recipe! 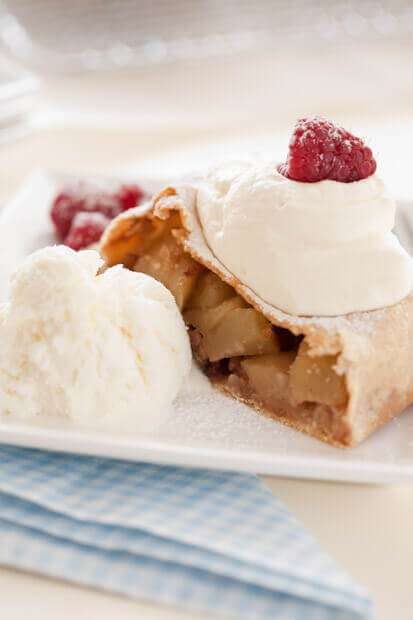 Apple strudel
from “Kaffeehaus – Exquisite Desserts from the Classic Cafés of Vienna, Budapest and Prague” by Rick Rodgers

1. Mix the rum and raisins in a bowl. Mix the cinnamon and sugar in another bowl.

2. Heat 3 tablespoons of the butter in a large skillet over medium-high. Add the breadcrumbs and cook whilst stirring until golden and toasted. This will take about 3 minutes. Let it cool completely.

3. Put the rack in the upper third of the oven and preheat the oven to 400°F (200°C). Line a large baking sheet with baking paper (parchment paper). Make the strudel dough as described below. Spread about 3 tablespoons of the remaining melted butter over the dough using your hands (a bristle brush could tear the dough, you could use a special feather pastry brush instead of your hands). Sprinkle the buttered dough with the bread crumbs. Spread the walnuts about 3 inches (8 cm) from the short edge of the dough in a 6-inch-(15cm)-wide strip. Mix the apples with the raisins (including the rum), and the cinnamon sugar. Spread the mixture over the walnuts.

5. Bake the strudel for about 30 minutes or until it is deep golden brown. Cool for at least 30 minutes before slicing. Use a serrated knife and serve either warm or at room temperature. It is best on the day it is baked.

Strudel dough
from “Kaffeehaus – Exquisite Desserts from the Classic Cafés of Vienna, Budapest and Prague” by Rick Rodgers

1. Combine the flour and salt in a stand-mixer fitted with the paddle attachment. Mix the water, oil and vinegar in a measuring cup. Add the water/oil mixture to the flour with the mixer on low speed. You will get a soft dough. Make sure it is not too dry, add a little more water if necessary.
Take the dough out of the mixer. Change to the dough hook. Put the dough ball back in the mixer. Let the dough knead on medium until you get a soft dough ball with a somewhat rough surface. 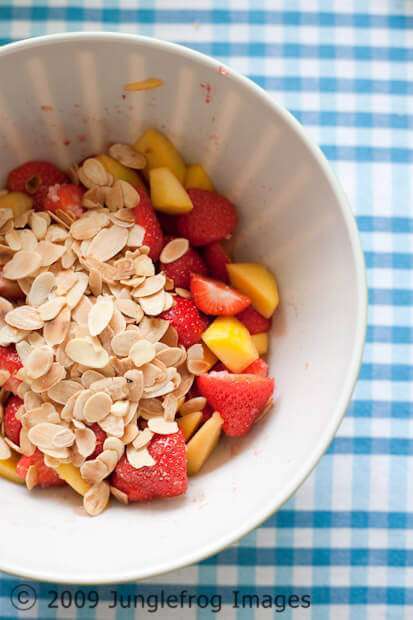 2. Take the dough out of the mixer and continue kneading by hand on an unfloured work surface. Knead for about 2 minutes. Pick up the dough and throw it down hard onto your working surface occasionally.
Shape the dough into a ball and transfer it to a plate. Oil the top of the dough ball lightly. Cover the ball tightly with plastic wrap. Allow to stand for 30-90 minutes (longer is better).

3. It would be best if you have a work area that you can walk around on all sides like a 36 inch (90 cm) round table or a work surface of 23 x 38 inches (60 x 100 cm). Cover your working area with table cloth, dust it with flour and rub it into the fabric. Put your dough ball in the middle and roll it out as much as you can.
Pick the dough up by holding it by an edge. This way the weight of the dough and gravity can help stretching it as it hangs. Using the back of your hands to gently stretch and pull the dough. You can use your forearms to support it.

4. The dough will become too large to hold. Put it on your work surface. Leave the thicker edge of the dough to hang over the edge of the table. Place your hands underneath the dough and stretch and pull the dough thinner using the backs of your hands. Stretch and pull the dough until it’s about 2 feet (60 cm) wide and 3 feet (90 cm) long, it will be tissue-thin by this time. Cut away the thick dough around the edges with scissors. The dough is now ready to be filled.

Tips
– Ingredients are cheap so we would recommend making a double batch of the dough, that way you can practice the pulling and stretching of the dough with the first batch and if it doesn’t come out like it should you can use the second batch to give it another try;
– The tablecloth can be cotton or polyster;
– Before pulling and stretching the dough, remove your jewelry from hands and wrists, and wear short-sleeves;
– To make it easier to pull the dough, you can use your hip to secure the dough against the edge of the table;
– Few small holes in the dough is not a problem as the dough will be rolled, making (most of) the holes invisible. 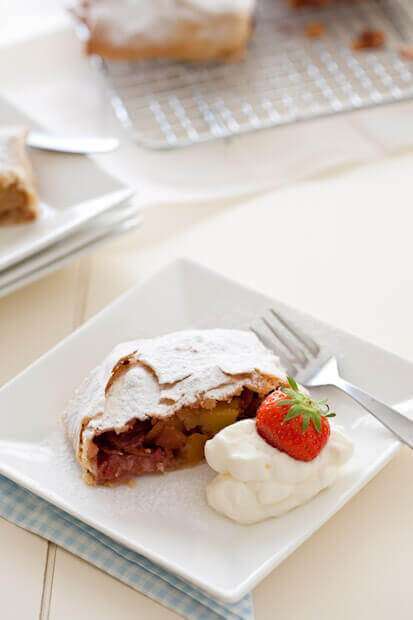