A good breakfast is the start of your day. That makes it one of the most important meals of the day. Or so I like to think. This apple compote is made with chestnuts to give it that autumn feel. I like to eat it with coconut yogurt for a good beginning of my day!

If you would have to pick one ingredient that screams autumn, which one would you choose? I have to decide between pumpkin and chestnuts I think. While the pumpkin is more versatile there is something utterly satisfying about chestnuts.

To peel or not to peel

The first time I tried out chestnuts I bought them whole. It was for a turkey stuffing so you can imagine how much I needed in that particular recipe. I set myself the task to cook the chestnuts and then peel. What a nightmare. My fingers where sore and blistered after having gone through all of them and I made myself the promise to never do this task myself again. And I don’t really have to. Chestnuts can be easily bought cooked and vacuum sealed. At least when it is the right season.

Which leads me to the next possible issue. If you do use pre-cooked chestnuts, you will find that they become mushy fast if you process them too long. So make sure you don’t overcook them. In this apple compote recipe the total recipe needs only 15 minutes. That can already be too much for the chestnuts.

Alternatively you can prepare the chestnuts separately and just briefly fry them in a pan and then add to the apple. That way you will make sure to not overcook them. I like to serve the apple compote with chestnuts over coconut yogurt. Also good to have with a glass of delicious ginger tea. 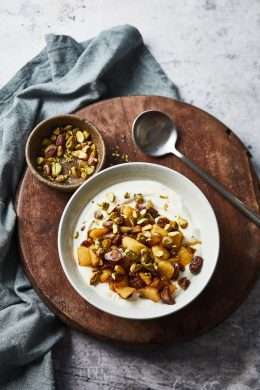 If you want to make sure your chestnuts do not become too mushy, keep them away from the apples and prepare them in a separate pan. Heat this with some oil on high heat and quickly brown the chestnuts. Add them to the apple compote later.
Course: Breakfast
Cuisine: Vegan
Keyword: apple, chestnuts
Diet: vegan