Slow is the way to go – Morrocan style

I’ve said it before but part of my resolutions for the coming time is to use our slowcooker more often. First of all because with the times that we work these days it is insane to have to cook after coming home. As we speak it is Sunday evening 8 pm and Tom is still on his way from the market he’s working on today (Sunday market) I just do not feel like cooking anymore at that time of night. And to prevent us resorting to junkfood accompanied by a bottle of wine (because we deserve it… haha) I am testing out various slowcooker recipes. It’s still an ongoing process but this one is pretty good!

I’ve used pumpkin in this recipe and that is the only thing you will have to add at a later stage or otherwise it will have completely disintegrated by the time you’re ready which is roughly 8 hours for this dish. So I added that about 2 hours before the end of time. It’s also a perfect budget dish as you can use cheap cuts of meat which will transform to soft and tender in the cooking time. Bonus point is that it actually becomes better the day after, so make sure you make enough to freeze the next portion or to keep for the day after. It has subtle Moroccan flavours (don’t you just love cinnamon in dishes like this?) 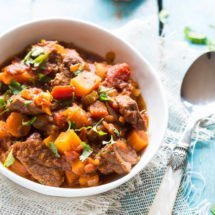