Yes, I’m back! Yesterday I came back from hot hot Jordan and bang, right back in the middle of rainy season here in the Netherlans. And it’s funny how that works. While we were melting away by the pool with 40 degees Celsius in the shade (yes really) we came to the conclusion that rain sounded really good. Nice cold and wet… And as soon as you arrive back in Holland and you’re standing in that rain, those 40 C don’t seem so bad anymore and sound rather appealing. Hahaha… How easy we are to forget! Don’t they say “the grass is always greener on the other side?”

But seriously: I am so not made for 40 degrees…

You can leave it up to me to go to Jordan when there is some sort of heatwave going on. Where even the locals are complaining that it is hotter than it has ever been. We also got some serious lightning storms on the last evening followed by the first rains of the season. It was apparently also just in time that we left Wadi Rum as it started raining about an hour after we left and the whole area was closed due to flash floods! Can you believe? Anyway, I’ll be sharing more of my trip to Jordan very soon. I was impressed with the country and the people.

Which all have nothing to do with these delicious snacks. I had made granola bars before and those were pretty good too but these are on another level. The recipe is from the sister of the famous Dutch model Doutzen Kroes. Heard of her? She must be the most successful model in the Netherlands. Her sister, almost as pretty, is doing really well as a health coach and this recipe is from her second book. It’s in Dutch but it is called Powerfood 2. Great recipes in there for the days when you want to go the healthy way. 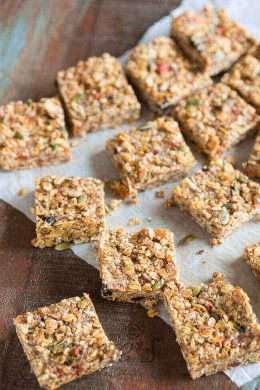 This recipe has no added sugar or gluten and is vegetarian and vegan approved 🙂
Prep Time: 30 mins
Servings: 12 bars or cubes