Recipe by ingredient » Chicken » Cauliflower couscous – halfway through the Whole30

Cauliflower couscous – halfway through the Whole30 When we did the whole30 for the first time somewhere in August last year I had never thought cauliflower would be such a versatile vegetable. I mean, sure, we all know cauliflower right? It’s good. And in it’s plain form the best way to have it is with potatoes and a good meatball… or so I think. But at some point while reading through some of the documentation on paleo I saw a mention of cauliflower rice. Rice. From cauliflower? Really? It didn’t immediately sound very appealing to me, but it did sound interesting and let’s face it; if you’ve made a lovely curry you want to eat it with rice or something “rice-like” so I tried the cauliflower approach and loved it. And then I realized that I haven’t really shared a recipe with cauliflower here so here it is. I hardly ever make the same dish with this and I just throw in what I have on hand. I would also rather call it cauliflower couscous as really the consistency is more couscous than rice but maybe that’s just me. And like couscous, the cauliflower is like a blank canvas you can work with. It tastes completely different from normal cauliflower. We’ve had people over for dinner who didn’t guess that they were eating cauliflower instead of couscous.. It’s just that good. The qty’s given here are for a lunch dish for two. If you eat this as a sidedish this will be enough for four. 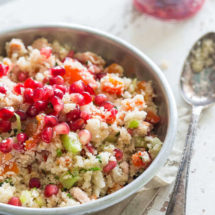