Tiramisu with eggnog and white chocolate

Ah that delicious combination of tiramisu with eggnog and white chocolate. It is the perfect festive dessert. I’ve used the Dutch eggnog which we call ‘advocaat’ It’s similar to regular eggnog but it uses only the egg yolks. Making it a more rich in flavor kind of drink.

Tiramisu with eggnog and white chocolate

I have a big love for tiramisu. It is such a versatile recipe and you can easily change it to fit your needs. I love my strawberry tiramisu in the summer or the more traditional version of tiramisu with amaretto. Technically the amaretto one isn’t traditional either, as you should be using marsala wine. But since I don’t particularly like that my favorite version is the one with amaretto.

Initially I made this tiramisu with eggnog for the first time after we did a so-called black box. Have you ever seen the version of masterchef where they get a mystery box? I think our black box is best described as that. We went out and filled a box with ingredients. The other person then had to come up with recipes based on that box. Great fun and I’m pretty sure this particular box contained eggnog.

Eggnog is a funny ‘drink’ You don’t actually drink it but you have to use a spoon to eat it. It more resembles something like custard. There seems to be a difference between the Dutch eggnog that I used here and the one you would get in the US. If I understand correctly the main difference is that for the traditional Dutch version we only use egg yolks. Whatever the case for this recipe for the tiramisu with eggnog you can definitely use either of the two. Depending on where you live. If you want to make it from scratch; I found a traditional recipe here.

Obviously if you have kids at the Christmas table you might want to leave out the eggnog and replace it for custard. That will also be delicious but different in taste. Since eggnog itself is not particularly strong I do like to use quite a bit. The mascarpone gets this slight yellow-ish color which actually also makes this the perfect Easter tiramisu dessert.

Having said that; this tiramisu with eggnog gets better after a little while. You can eat it straight away but it is better to have it sit in the fridge for at least a few hours so the flavors have the chance to deepen. And the cookies to soften a bit.

You can serve this in a large dish or make individual ones. Whichever you prefer. 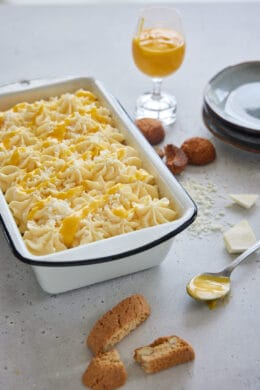