Recipes » Dinner & sides » A match made in heaven: Albondigas with a twist + Rioja wine

A match made in heaven: Albondigas with a twist + Rioja wine

My father in law is coming to dinner tonight so in order to be able to give him some good food, I started cooking a day ahead… Always good, so I can actually take a photo in between also… (and taste the goodies…lol) And because it’s always fun to make several little dishes the plan was to create a tapas feast.

Normally I first think about the food, but in this case I started with the wine first. I bought a bottle of Berberana rioja after Tom had extensively tested it last week during a BBQ with our friend Marco, who happens to have Spanish roots. It’s a strong wine, so it needs bold flavors to go along with it.

So I posted a tweet for some tapas inspiration and I started thinking about pairing this with one of my favorite tapas dishes, albondigas. Now you really don’t need to be a master in the kitchen to make a few little meatballs, but the fun part about Albondigas is that you can use so many flavors in the meat! I had never tried adding bits of cripsy baked chorizo into the meat but I figured it might be delicious.

So in terms of being authentic Spanish in this recipe… Uhm… probably not, as I just mixed and matched with the flavors that I know I like. They’re spicy little fellows so you might want some other more mellow dishes to cool things down.

These albondigas would also go really well with the chorizo in wine and the patatas bravas. We had them with dates wrapped in bacon and baked in the oven and some other delicious goodies we came up with. I kind of forgot my father in law doesn’t like too spicy but he was happy to munch on the albondigas so I guess not too spicy. 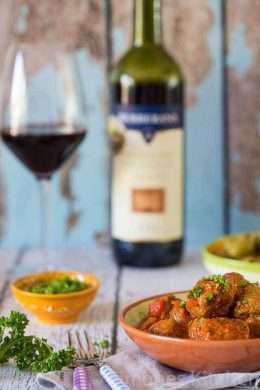 Albondigas with a twist

10 comments on “A match made in heaven: Albondigas with a twist + Rioja wine”