Recipes » Basics » Beet guacamole by In my red kitchen

Beet guacamole by In my red kitchen

I met Ellen from In My Red Kitchen, during one of our workshop shortly before she would move to sunny California with Paul and I have been following her ever since. Not only because it is fun to read about her adventures in the country on the other side of the ocean, but also because she makes beautiful photos and shares delicious recipes.

I’m pretty sure her kitchen is no longer red but it doesn’t make it any less exciting. I can sometimes be a bit jealous of the sunny climate she gets to play around in! Ellen is sharing a delicious beetroot guacamole recipe with us today! Try it! 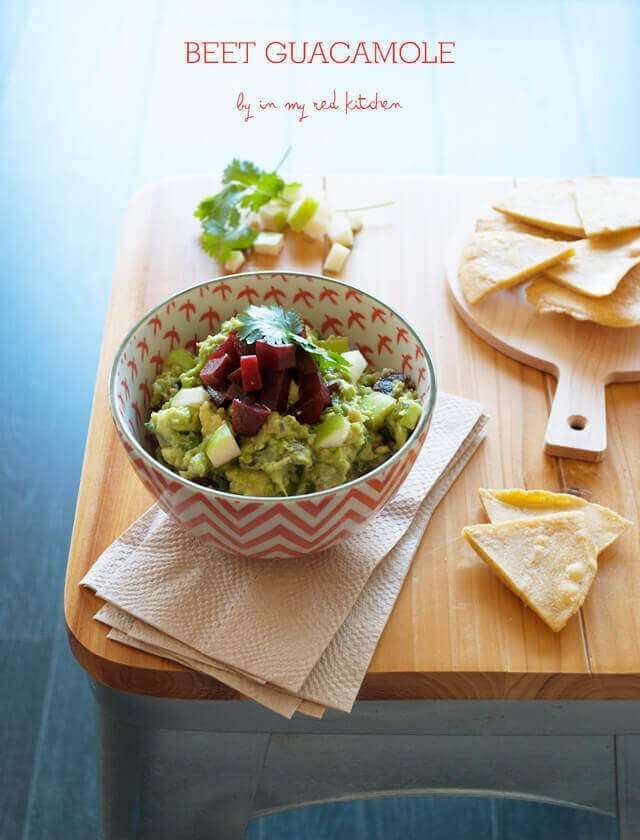 I’ve been living in sunny California for almost one and half year now, in the amazing city of Los Angeles.

If you had told this girl from a small town in the east of the Netherlands five years ago that she would move to America I would have laughed in your face.
I must admit that I was already thinking to move abroad in the future, but I was thinking into the direction of the UK, or something like that. But in the meantime I met Paulus who took me on holiday to LA and from then on I was sold. 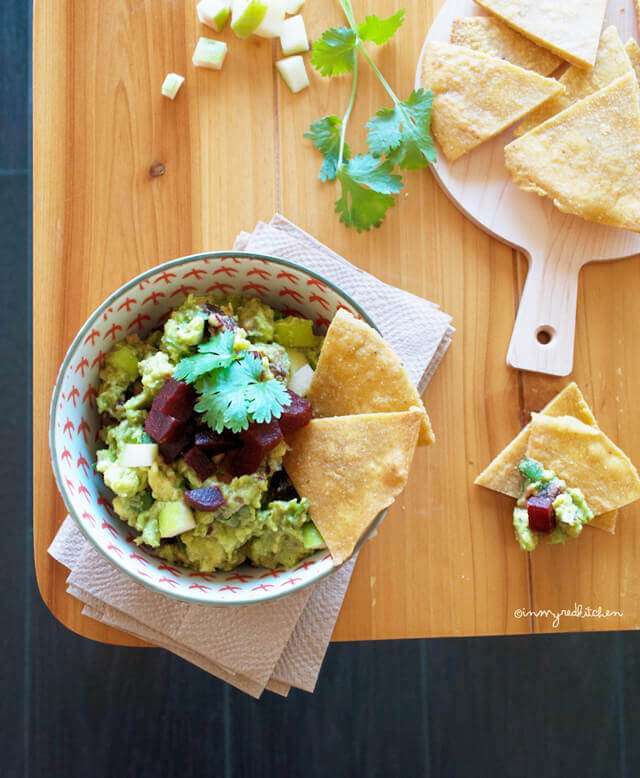 Almost two years ago, the first email came with an interesting offer for a job for Paulus. The rest is history because within 6 months we lived in LA, married and all. When I read or hear about people who have left everything behind to move to another country I think “wow, that’s a big step!”. Until I realize 1 second later that we have done that. And yet it doesn’t feel like a big step, it all went very gradual.

And of course I’m lucky that we were going to live in America and not in Asia or Africa, where life is really different from our life in Amsterdam. I’m not sure I would want to move there, I mean… here in America they speak English and not some weird foreign language. I can’t imagine what it must be like to live in a place where you don’t speak the language. But even though we live in a Western country, yet you notice differences between America and Europe, and particularly the Netherlands. 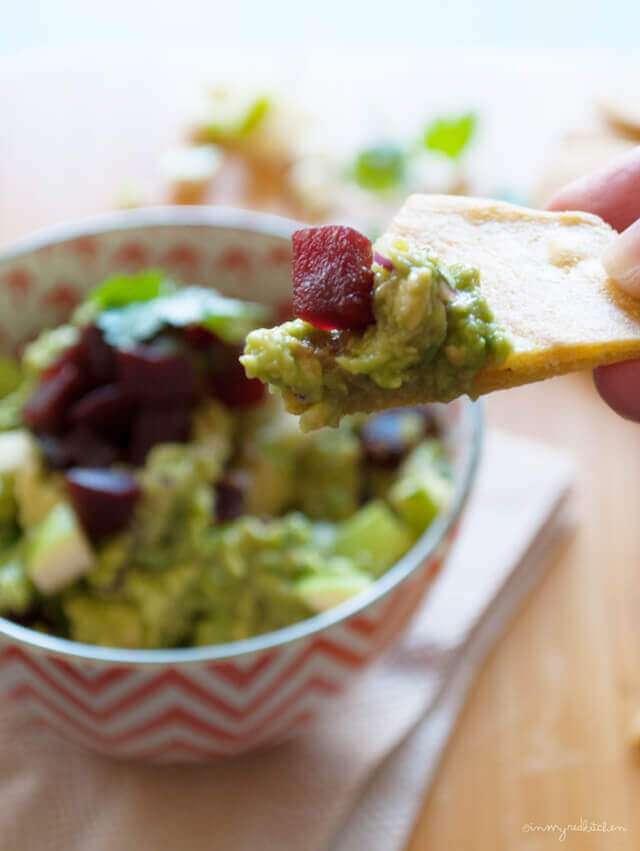 One of the biggest changes is the fact that I have my own car while I used my bicycle all the time to go around the city of Amsterdam. And I have not even told that only three years ago I got my driver license! I had to, because in LA you are nothing without a car. The first half year we had only one car and I had to bring Paulus to his work when I needed the car. I did that twice a week because I was stuck in traffic every time as I drove home again and went to get him, and he usually has no traffic at all, he has a really good commute. During those days I drove up and down all day, from one store to another, and I had to leave in time so I could get stuck in traffic again to pick him up from work. Fortunately that is over now as we both have our own car.

Last week I suddenly realized that I do miss that you can’t even buy a decent bunch of flowers in America. I usually had at least two vases with beautiful flowers standing in my house in Amsterdam, now there is an occasional small bunch for which I paid too much money. The cheapest option is to buy a small and ugly compiled bunch of 5 stems for $4 at my favorite grocery store Trader Joe’s. But believe me, it always looks a little sad and strange. I also once saw a bunch of overblown tulips at Whole Foods for $10. Seriously! The next day the petals would fall out, believe me, as I know my flowers.
Well, the lack of flowers is in any case filled by the lovely weather. It doesn’t get colder than 14 degrees Celsius in the winter and last year I walked around on flipflops during Christmas. Not bad right? 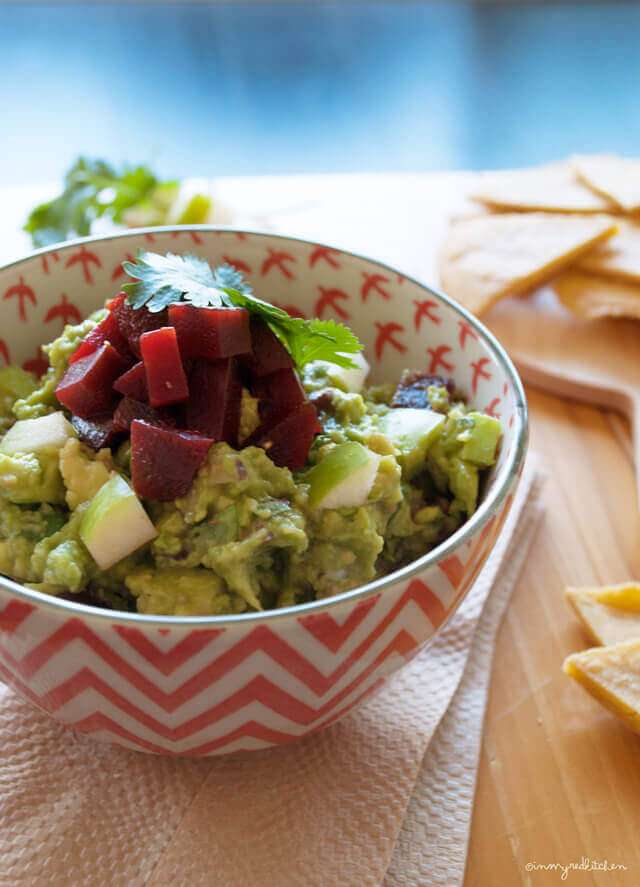 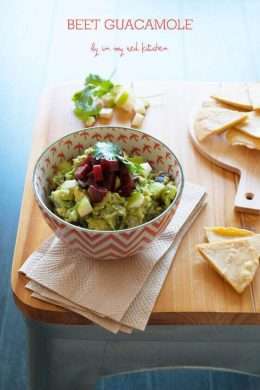 Eating out is also something that is so great here in LA, it’s an amazing city for foodies. Fresh fruits and vegetables are easy to find and that’s because it is all locally grown in California. Lucky me! If I didn’t love cooking so much, we could go eating out every day!

Many recipes that I create at home are based on the food I eat in restaurants, and so is this recipe for beet guacamole. I ate this once in a Mexican restaurant where we always came when we were on holiday in LA, now that we live here we have been back only once since we now know go to little less touristy Mexican restaurants. But the last time we were there, there happened to be a ‘guacamole festival’ and they served different kinds of guacamole. Of course we had to try that!

The guacamole with beets and apple was very tasty, with the sweet beet flavor and fresh and crisp apples. Try it yourself!

One comment on “Beet guacamole by In my red kitchen”