“Where did the eggplant go to have a few drinks?”
When I start thinking about these kind of jokes I know I am officially BORED.
I’m bored, have a temper and I am hungry. It’s been a while since the Misses got the jeepers and started with all kind of healthy ‘veggiejuice’. The whole veggie detox tour was supposed to take five days, but without saying something it is more than a week later already and all I see in my fridge is vegetables and other kinds of healthy stuff.
All those vegetables have already taken the best of me and I think I am in the middle of a vitamin psychosis or something. Because just as I opened the door the fridge I really could swear that a nasty eggplant was laughing at me, just from behind the carrots. He gave me that purple and broad smile in which he wanted to tell me: “Hehe, you can open that door as often as you want, but you’ll find nothing but healthy stuff here.”
I hate vegetables who laugh at me. The same goes for zucchinis .Terrible to see a smirking green smile when you are hungry. That defiant laugh that wants to say: You can bite me, dude. But I am tasteless anyway. Hehe…” Hate those kind of veggies. By the way, that’s a big plus of a veggiejuice; even the most arrogant of vegetbales is squished to a mix of pulp and juice in this great apparatus. When you hear tose greens squeek when they land in the mixer, you can hear it’s the perfect butcherhouse for vegetables.  Let’s see who’s laughing now, huh? MUWHAHAAHAA!!

Anway, I was talking about the ‘veggiejuice 5-day detox’ adventurem before I got carrief away, The Misses started a juice trip for ‘one week only’ Which meant: morning, noon and evening, nothing but juice from vegetables. At day four I got happy again. But mainly because I saw the reign of vegetable come to an end in this house. My mouth started watering at the thought of all those delicious things I had to miss for a whole week.

Just as I wanted to leave the house and buy som beautful steaks, the Misses called: “Honey dear, I want to keep it healthy after the vegetable detox, ok?” Slowly my world started to crumble. I tried to negotiate with a meek: “Yes, honey. Healthy? Like in a magnificent steak with some baked potatoes? Baked in coconut oil, ofcourse.” But she didn’t buy it. The green reign of terror was going to be extended for an indefinite period. Not room for baked potatoes in this kitchen. There was only room for fruit and veggies. Yesterday, was a day of real sin, for we ate a pasta. Reckon, a pasta made from spelt with a sauce of lentils. And, to make it even worse, it was a vegetarian dish. I don’t know from which dark corner of the world the Misse got a spelt pasta (Yes! Much more healthy than a regular pasta. Sure!!!), but it makes me sad.

I AM IN WANT OF MEAT! The least I want is something that has been caramelized in a frying pan. Give me a break, please! Mister Maillard didn’t invent his reaction for naught, so let’s make the most of it.

When I  open the fridge again I still see that eggplant smiling at me acidly. Is there some decent food in the house anyway? Don’t think so. Just a few potatoes, some pasta that was left over from yesterday and… that frigging eggplant.
But then a devilish plan started to unfold as I reached for the eggplant. I could swear again… but this time the purple thing was looking startled.
A minute later this ‘laughing’ eggplant was sliced up thinly as he was about to be a major star in my moussaka made from pasta leftovers.
And ofcourse a good moussaka can’t do without some slices of eggplant.
It goes without saying that I too some minced meat out of the freezer to add to the dish. The Lord gave us fangs, so use them wisely; and frequently. Enjoy this quick to make moussaka.

BTW: Where did the eggplant go to have a few drinks? To the saladbar, of course. 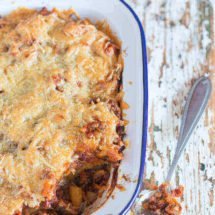 Print
Moussaka made from Pasta leftovers
Prep Time
10 mins
Cook Time
30 mins
Total Time
40 mins
Great and easy to make moussaka from the pasta you made the day before. In stead of throwing away your pasta sauce, impress your friends with this greek themed dish.
Servings: 3 -4
Ingredients
Instructions