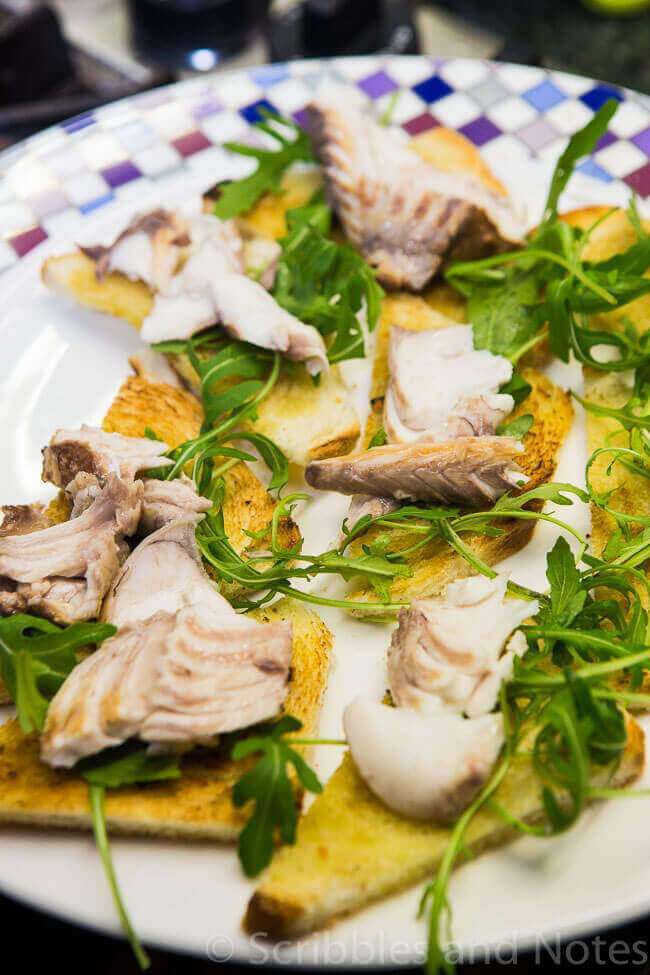 Well what can I say? I’ve had better days but than I also limited the damage somewhat… Yesterday we had our cooking club which is a two monthly recurring event where we gather together with a group of friends and we cook. Which is always great fun and we have a chef who guides us where needed. I told him beforehand that Tom and I were doing a ‘Whole30’ and he even read up on the subject. He tried to create a whole30 menu but he thought it was too difficult. Lol… I don’t blame him. I am sure mutiny would have been the result of he had actually done a whole30 menu…! The group was big this time with 15 people. As it was the menu was pretty healthy; we smoked some fresh fish as appetizers. I had the above but without the toast. For starters there was red snapper with salad and sauce of red cabbage. In between we had a white bean soup, main was filet of deer with cranberry sauce, roasted veggies and pineapple puree and for dessert we had ricottacake with cranberry sauce and poached pears…

I fully intended to stick to my whole30 rules but I caved in… I had a tiny slice of the ricottacake… (and boy it was delicious!) and I did eat the sauce with the deer and the fish in the other dishes. Not according to the rules but still I did not drink any wine, I did not eat any bread and overal I skipped quite a few bites (like cheese…oooooh) But that ricotta cake was just too good, so I couldn’t resist.

I guess it proves that I am human after all!