Well here it is; the recipe for the roasted chicken that was the subject of the chicken photography challenge.. 😉 Good looking chicken right? It was a good dish, but I had expected a much more sticky outside to be honest. The chicken is emerged in the soy mixture for over an hour and so I was thinking it would be nice and sticky on the outside, but that didn’t happen. Too bad, but the taste was quite allright. And considering the fact that this is only the second chicken I have ever roasted at home (yes, true!) I think it’s looking quite good! 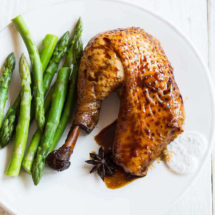