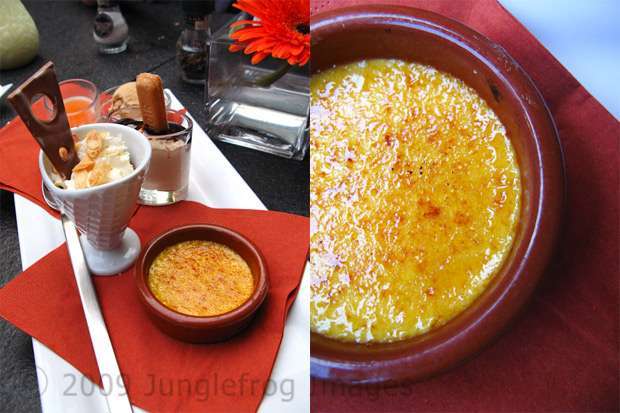 This weekend we went to Den Bosch with friends, just to spend a fun weekend in a pretty city… 🙂 We were very lucky that the weather was in our favor and it has been sunny the entire weekend, which was fabulous. I think I even got a bit of a suntan!

Ofcourse we had to start the day with a cup of coffee and a “Bossche Bol” which is THE thing to have when you’re in Den Bosch. It’s puff pastry filled with whipped cream and topped with chocolate. I don’t have a proper photo of it, but I think you get the general picture! 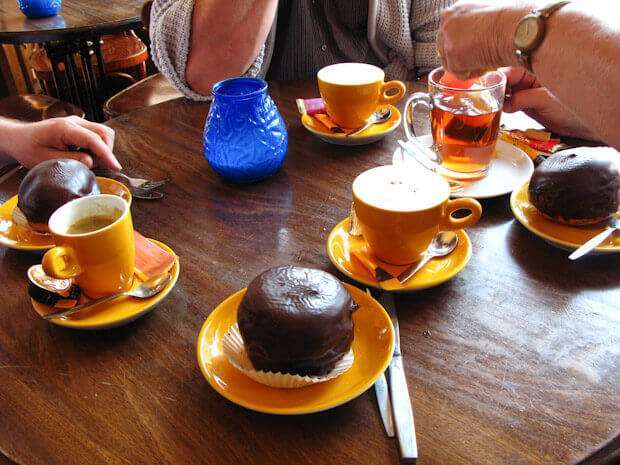 Let me tell you; it was delicious but also very filling! Den Bosch is a really old and beautiful city, so – also with the weather so beautiful – it was a joy walking around, spending time on a terrace having a tea or a nice glass of wine. We did some shopping and after closing time we went to our hotel which was slightly outside of the city. Due to the whole economic crisis most of the hotels have dropped their prices drastically which means you can get a really good deal in one of the better hotels and spend the night there for half the money it used to be. We dropped our bags and went back into town for dinner. We really had no idea where to go so we took the advice of the receptionist and went to Picasso which looks like a small restaurant from the outside but once inside it was rather large and completely packed with people. I think that is always a good sign and we were quite lucky to be able to get a table outside at the terrace. They had a beautiful outside patio which was out of the wind and actually better then indoors as it was a lovely evening. Outside on the streets it was windy, but because there was no wind it was gorgeous. The patio had old walls and lots of greenery surrounding it, including tweeting birds to make the scene complete. I do think it will also be smoldering hot there during the summer, but for now it was perfect. 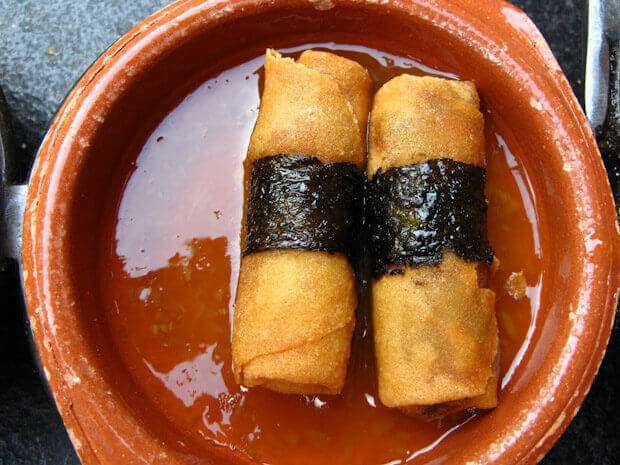 As a starter I had vegetarian tapas which were four small dishes. The vegetarian springsrolls you see here, one little bit of quiche with goatcheese, some salad with small chunks of manchego and mushrooms filled with some kind of cheese as well. The only thing that could have been better was the mushroom as the taste was too bland. Even a little bit more salt and pepper would have increased the taste, but overall it was a perfect starter. Tom had the meat variation of the tapas dish, Mary had salmon mousse and Peter had a small stirfry dish with beef. All were very tasty.

For the main both guys went for the large steak option (which always seems to be the case when it comes to our guys..:)), Mary had a spaghetti pesce with seafood and I had the seabass steamed in a bananaleaf with lemondressing. I do think that the presentation of the food could have been a little bit better, as I find that you eat with your eyes first, right, so it’s important how the food is presented. 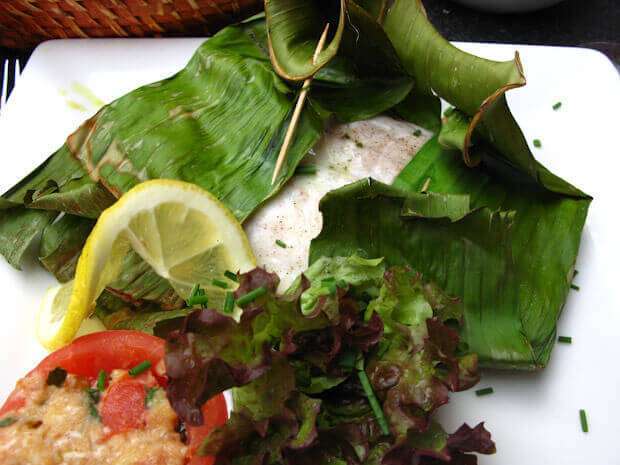 And as you can tell from the photo it looks a bit – well messy I guess is a good word to describe it. Especially once you peeled off the top of the bananaleaf which was very crispy, it looked terrible. The taste however was great and ultimately that is the most important. I do think that ever since I started doing foodphotography I have become more critical of the food presentation in restaurants. I like the food to look beautiful before I start eating it!

We all liked our mains as well and hesitated wether we should opt for dessert or not, but decided to go for the whole thing. I chose the pallet picasso which was basically a grand dessert and the first photo you see up top. They were all tiny portions though, but still maybe slightly too much. Chocolate mousse, mascarpone with coffee, creme brulee, pannacotta (too much gelatine!!!) and macadamia ice. I didn’t finish the icecream as that was just too much and also the least tastiest of the lot.

All in all, it is certainly a restaurant where we would go again. They had great wines, with the exception that I asked for a dessertwine (which was on the menu) and instead received a terrible tasting sweet sherry. Now I don’t like sherry so that could be the reason, but I didn’t think sherry is called a dessertwine, right? Anyone know?

They had a special deal for a threecourse meal for € 28,= (with some additions for some of the dishes) but I think that for the quality and the atmosphere that was certainly worth it! So if you ever find yourself in the vicinity of Den Bosch (also called ‘s Hertogenbosch) you should pay them a visit. Making a reservation upfront is probably a good idea though.

Ofcourse we went for drinks afterwards at the marketsquare to end the day at our hotel. 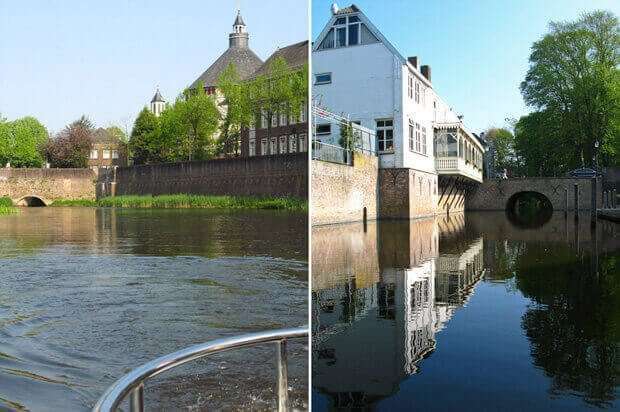 The next morning we woke up to another beautiful and went for a boatride across the Binnendieze, which is another tip to do when you’re in the area. All in all a very successful and fun weekend with gorgeous weather, good food and great company so what more could we want?