Quick dumplings with pork and shrimps I was browsing through my collection of recipes that I haven’t posted here yet and came across a whole bunch of pictures I took when I was at Esmee’s place in April. The cats where still with their mum at the time (they were 5 weeks old) and ofcourse I took a zillion photos while in between Es and I cooked up a storm… And because I happen to know that these dumplings are fantastic.. I just had to share. I’ve made them again since then when we had friends over for dinner and they went in rather well. The beauty of dumplings is that they are so quick to make and you can literally fill them with just about anything you want. These have a combination of porc (or is pork?) and shrimps, garlic and ginger and some other stuff we bought (yes, yes it’s in the recipe, don’t worry!) but if you want them less spicy leave out the chili peppers. Folding is not my strong point so we opted for the easiest folding technique which was the little envelops. Don’t they look pretty? Not that you would be able to tell what their original shape was once fried… And yes, this is tiny baby Humphrey when he was still being bottle fed… He’s a big guy now and outgrowing his sisters rapidly. But we were talking about the dumplings…

Got a little sidetracked here.

These are perfect as a starter to an Asian meal or as a snack on a rainy Sunday afternoon (and we’ve had plenty of those) or as a meal. I took most of the dumplings home and Tom and I had liked them so much we couldn’t stop eating the entire batch. Ending up to have these for dinner..

O well, you can do worse than that! 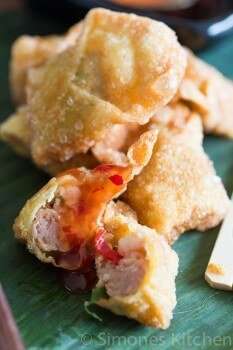