Pulled pork and what will be the next step It’s been over half a year now. Half a year that Tom has been without a job and by the way things are looking here in the Netherlands it is unlikely that anything will come along anytime soon. Which is scary to say the least and depressing too. Apparently the economic crisis is on it’s return in most of the countries in Europe, but here it is still going down. I’m not going to discuss politics here as I hate it and I would probably be an even worse politician then the ones we have here right now (although arguably… can it really get any worse??) In the beginning when Tom lost his job we were confident that he would find something else fairly soon, but no matter how many job applications he filled in, most came back with a ‘thank you, but no thank you’ note on it. On average any open position gets flooded with so many applicants that picking one is hard, let alone being the one who gets picked. So it is time to start thinking about alternative options. Because if there is one thing demotivating for anyone then it is having to sit home for months and months, without any foreseeable end. Money is one thing, but it’s worse not feeling like a valued member of society. When I started working for myself we always said that we would not have two entrepreneurs under one roof. Too high of a risk in case something goes wrong… But at the end of the day, if Tom doesn’t find a job within 1,5 year we’ll have the same problem, so like I said; time to start being creative. So over the last couple of days we have plotted and we have planned. We have had discussions, high hopes and scared moments too. My notebook is getting filled with lists of things to do, things to find out, people to contact and more stuff to do. But for the first time in months I see new excitement in Tom and that alone is worth a million bucks. There is still lots and lots of work to do before I can tell you what we’re up to.. 😉 (building the suspense here) but fingers crossed it will all come together!

In the meantime we were quite happy to still have some pulled pork leftover so an ideal lunch sandwich for tired minds.. 😉 This is the first time I made pulled pork and I LOVE it… It’s a cheap cut of meat but totally delicious. I’ve made mine in the slowcooker but if you don’t have one you can also make it in the oven or on the stove. 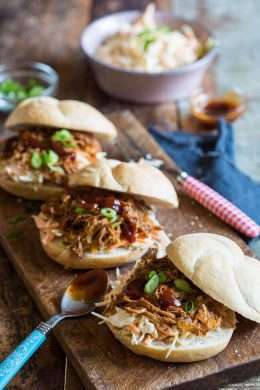