Don’t you just totally love it when you walk into the house and you smell that best of smells; freshly baked bread? And then to take it out of the oven and the moment you hear that soft crack when you break of a piece of warm crust and pop it in your mouth, unable to resist? O how I wish that scenario actually happened here in this very house!

Instead I tend to end up with bread that is either too dry, too firm or just plain disappointing… In all of the before three cases, it still beats getting the bread of the supermarket. Not that they have bad bread perse, but it’s just not the same as homemade, now is it? So yes, I do struggle with breadbaking. I followed a breadcourse before as you know, but as with many such things, haven’t baked a bread since. It was an enormously interesting course and I learned a lot but it was also pretty daunting to do all that stuff yourself. So when I learned about Levine’s workshop I decided that’s where I wanted to go. She approaches the whole breadbaking from a homebaking perspective, so I felt right at ease and with her guidance I actually started to feel confident I could maybe do this myself at home without too much danger of messing up the bread. We made two types of bread; the soft buns you see above and some crusty pistolets that I haven’t eaten yet. Too much bread to all eat in one go so they went straight into the freezer. But if the lunch we had is anything to go by then I just know that it is going to be awesome too. O and Levine gave us some amazing baguette too, which basically means I will have to come back to learn how to make those too. For now I will tempt you with this recipe for soft buns, which you can also make into the pretty ‘braided’ buns you see on top and below. And trust me when I say that it took me a while to make anything resembling a knot with that bread but it was fun and if you can’t do that you can always just keep them round! 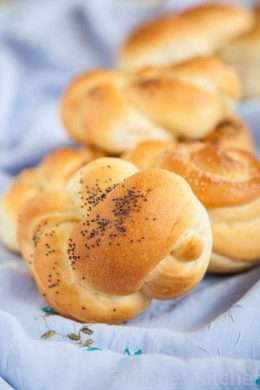