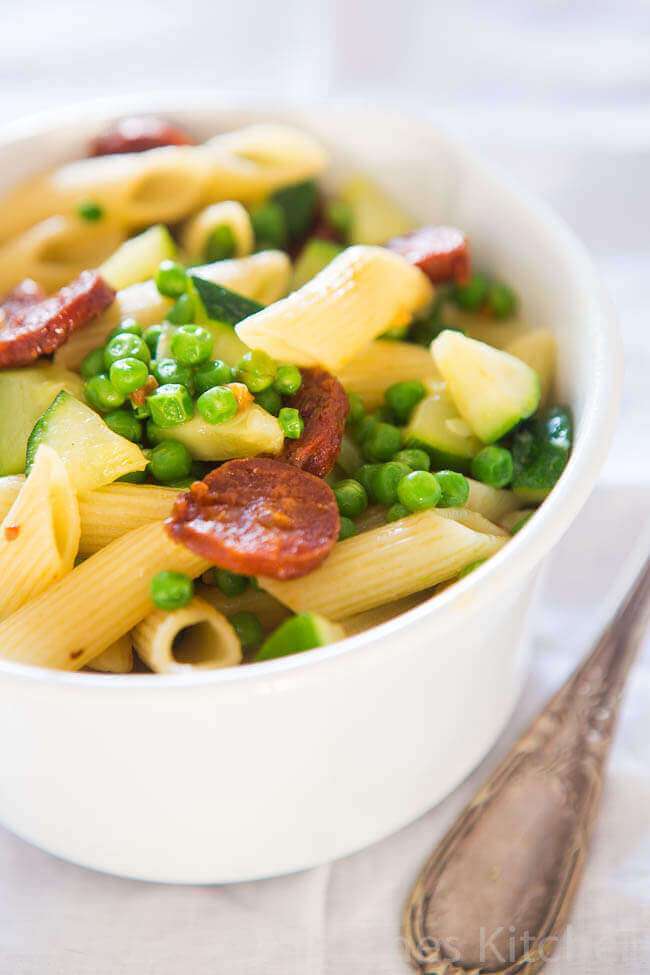 I would really like to be in bed right now, but I can’t… Sleepwise it’s not been the best weekend really. First we had cooking club last night and we were home around 1 am. Friends of ours were leaving for a holiday and we had promised to take them to the airport… Which was at 3. Yes, you guessed it right, 3 am. So hardly worth sleeping at all but we did decide to at least lie down for a little bit. Only to be woken again by 2 am by the freaking alarm… What do you mean? The walking dead? Those zombies were walking around the house here! Ofcourse we didn’t have to go both but you know… I kind of promised.. 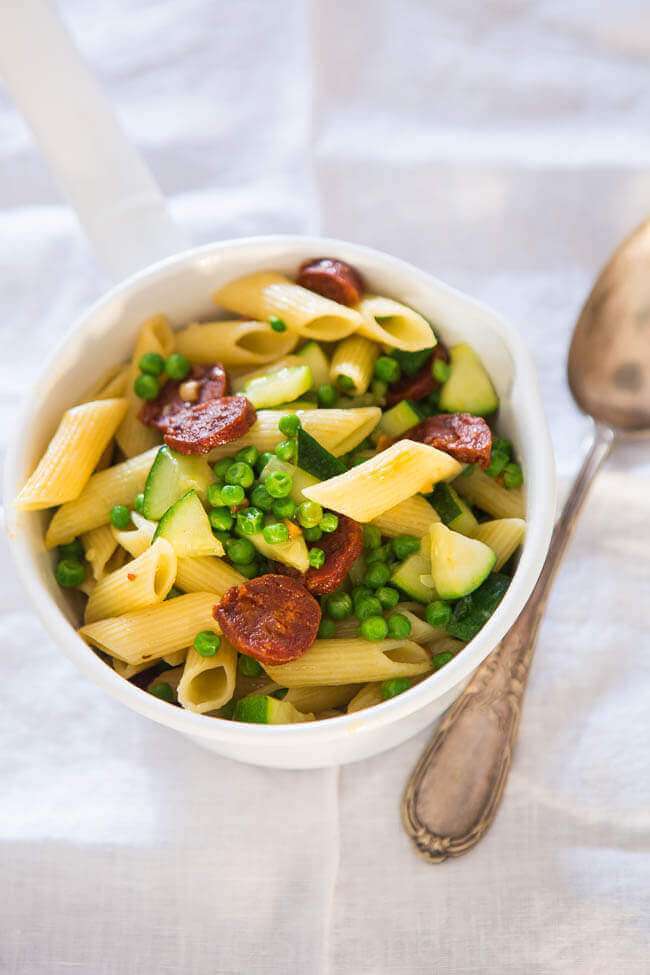 It was 4.30 am before we were back in bed and we couldn’t sleep in too long as there was a lot to be done and that same night Tom would be playing D&D with friends. On our attic… And that is noisy. So I can’t go to sleep. Well I could, if I wanted to but there would be no sleeping, so what’s the point. So here I am. Sitting behind the computer writing a bit about a pasta… A delicious pasta so that’s a good thing, but still…. do I really want to be writing about a pasta recipe in the middle of the night? Noooo not really.. Lol… Anyway, this is a winner and another one of the Donna Hay Challenge and so good that we’ve made it twice already. Which is sheer madness considering I have so many more to do, but it’s quick and easy and delicious. Those are always perfect for midweek meals. 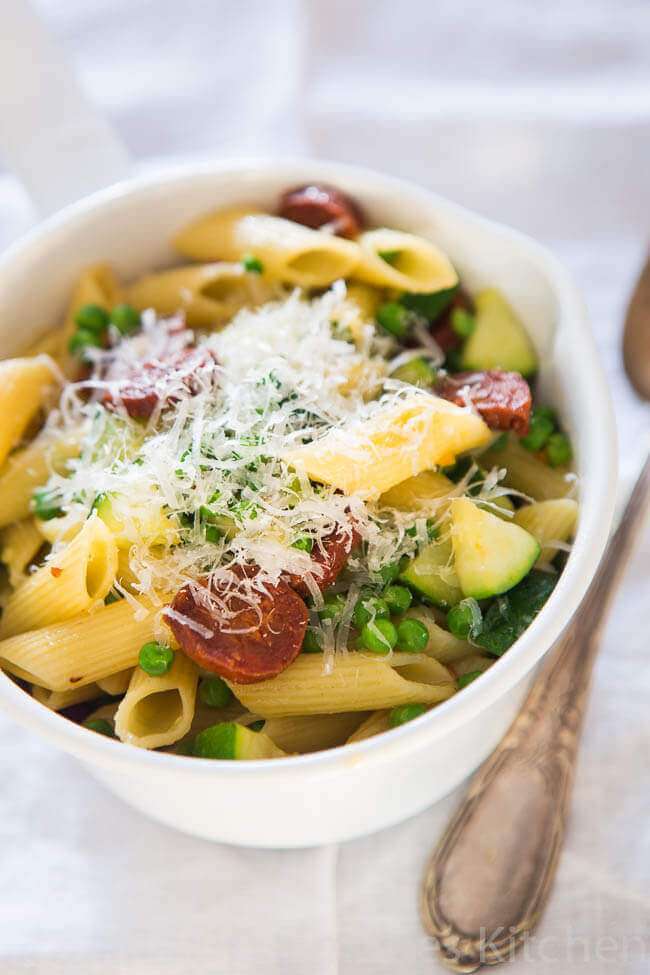 The trick in this dish is to bake the chorizo to a nice and cruncy but and add loads of parmesan. The original recipe adds the courgette raw and grated but I cut it in piece and quickly baked it… The lemon in the dish gives it a nice fresh accent and voila, we have another favorite! 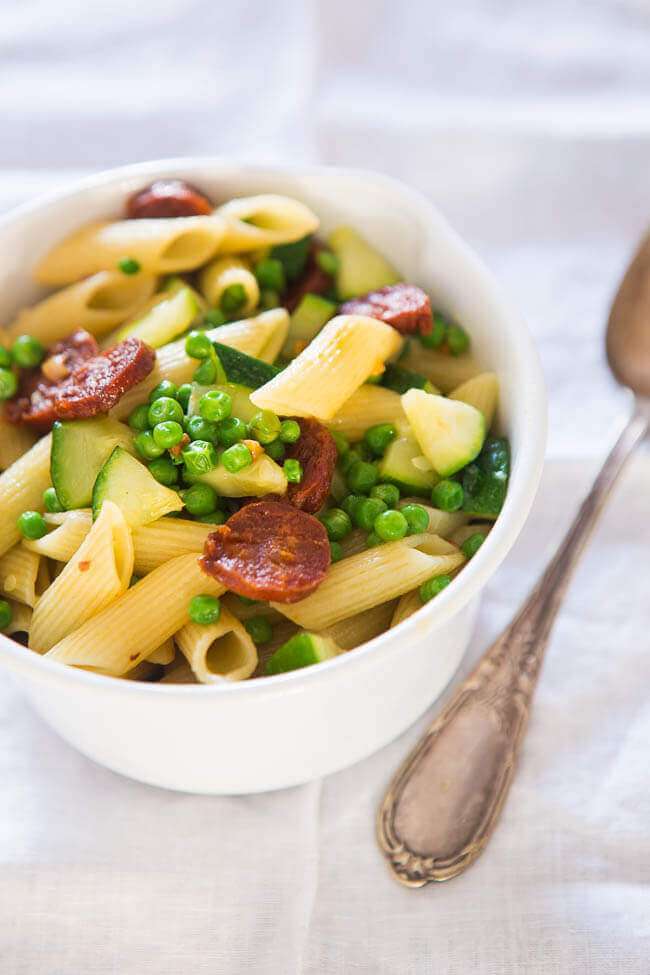 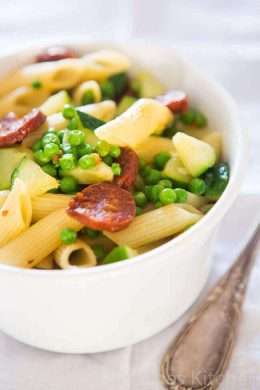 Print recipe Pin Recipe Save as favorite Saved!
5 from 2 votes

Penne with chorizo, peas and courgette

8 comments on “Penne with chorizo, peas and courgette – Donna Hay #6”